The Modern Crime Victims’ Rights Movement began more than 30 years ago and aspired to improve the treatment of crime victims in the justice system. This Movement has since evolved into “one of the most successful civil liberties movements of recent times.”

In Linda R.S., the Supreme Court considered whether an unmarried woman could seek to enjoin the prosecutors’ office from discriminately applying a statute criminalizing the non-payment of child support by refusing to prosecute fathers of children born to unmarried women.

The Court’s narrow holding was that the victim could not demonstrate a nexus between the prosecutor’s alleged discriminatory enforcement of the child support statute and the woman’s failure to secure child support payments, and as such, the victim did not have standing to seek the relief she requested.

In dicta, the Court acknowledged the then-prevailing view that a crime victim cannot compel a criminal prosecution because “a private citizen lacks a judicially cognizable interest in the prosecution or nonprosecution of another.”

The Court went on to provide a foundation for remedying the above-described situation when it stated that Congress could “enact statutes creating legal rights, the invasion of which creates standing, even though no injury would exist without the statute.”

Nearly ten years after Linda R.S., in 1982, the final report of the President’s Task Force on the Victims of Crime issued.

Since that time, the Modern Crime Victims’ Rights Movement has aggressively aimed to create an independent participatory role for crime victims in criminal justice proceedings.

The Modern Crime Victims’ Rights Movement has attempted this in a number of ways: in state legislatures and the federal Congress.

In the federal system, Congress passed the first of several pieces of crime victims’ rights legislation in 1982, the Victim and Witness Protection Act, and subsequently passed a series of laws, successively giving greater legislative recognition to the rights of crime victims.

In addition to these legislative efforts, the judiciary has recognized aspects of the move toward participatory status for crime victims.

Specifically, in his concurring opinion in Payne, Justice Scalia noted “a public sense of justice keen enough that it has found voice in a nationwide ”˜victims’ rights movement.’”

The result of these efforts is a myriad of laws affording rights. These rights can be loosely categorized into the following rights: 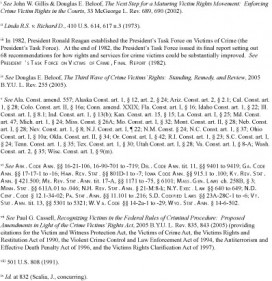