Voices for Justice is NCVLI’s annual fundraiser, which celebrates survivors of crime and the people who fight for their rights— from attorneys and advocates to volunteers and community partners.  This year’s virtual 6th Annual Voices for Justice is transitioning in honor of NCVLI’s 20th anniversary! The evening will go digital for national involvement, and be dedicated to honoring those in the national victims’ rights community and their successes in advancing victims’ rights.

Voices for Justice went virtual this year! Thank you to all who celebrated the work of National Crime Victim Law Institute on September 23rd with us. If you missed us live, watch the recorded event to hear from staff and board leadership about how NCVLI celebrates survivors of crime and the people who fight for their rights. 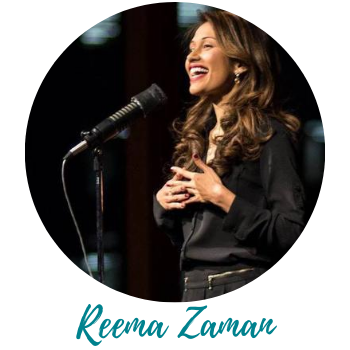 Reema Zaman is an award-winning speaker, actress, and author of the critically acclaimed memoir I AM YOURS. I Am Yours has been adopted into the curriculum of several high schools through an Innovation Grant from the Oregon Department of Education, and is being adapted into a movie. The New York Times states that “Zaman writes beautifully of the pain and frustration of being a woman in a man’s world, an immigrant in a world suspicious of outsiders.”

As noted by Forbes magazine, her life and career have been “A fabulous trajectory of powerful transformation.” Reema’s work has appeared in Vogue, Ms. Magazine, The Guardian, Salon, and other leading outlets. A “spellbinding performer of exceptional presence,” Reema is a renowned speaker and has been performing worldwide since she was six years old. She was the 2018 Oregon Literary Arts’ Writer of Color Fellow and is currently partnering with the International Rescue Committee and Girls Inc. to serve crucial causes and empower the next generation of leaders. Reema is credited with coining the term “immigrant abuse” and has joined forces with the nation’s leading advocacy organizations to advocate for change in policies that impact immigrants and survivors of abuse.

Born in Bangladesh and raised in Thailand, Reema graduated with degrees in Theater and Women’s Studies from Skidmore College. Learn more about Reema here.