ξενία in Greece- Almost a month in Athens

Oof. It’s been a long three weeks, and I write this blog post from an adorable balcony of a cafe in Delphi. 21 of us arrived in Athens on September 2 to move in to our apartments in the neighborhood of Pangrati and begin our orientation at CYA. Everyone got situated on Monday and maybe 10 or so of us went out to the square down the street from our apartment to talk and explore the neighborhood.

We had a relatively easygoing orientation on Tuesday and Wednesday, and on Wednesday 13 of us took the metro and 2 buses to get to the beach at Piraeus. The beach was nice, but the best part was the little boy who kept trying to get us to play with him. We probably spent 45 minutes playing with him and he was showing off his skills at skipping rocks, but when we started packing up to head back in Athens, he was so sad and pouting in the water about to cry :’(. I managed to get him to give me a hug, and he gave Megs a hug and high fived Andrew, and then we went to grab some souvlaki before taking the tram back to the city. 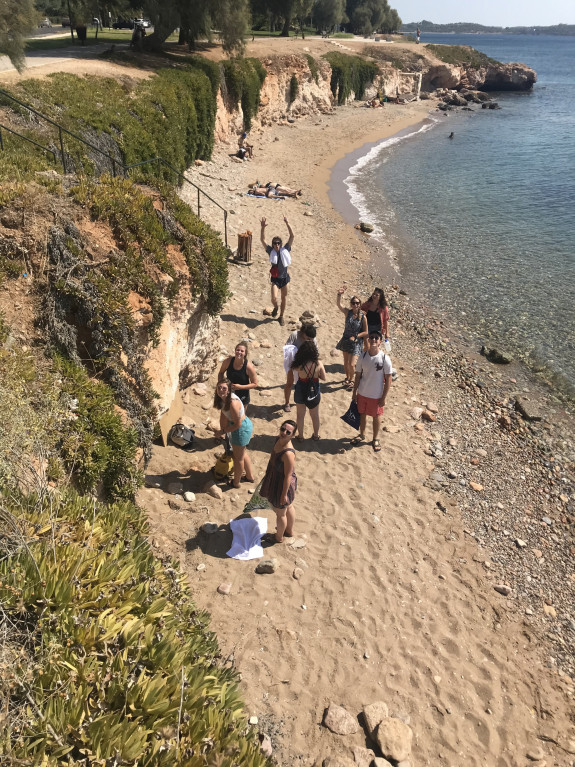 Settling in on the burning hot sand

Bright and early on Thursday morning, Sophie, Katelin, Jack, Andrew, and I took a taxi to the trani station and got on the train towards Litochoro. We arrived in Litochoro around 11am, took a taxi up to the trailhead before starting our climb up to Mount Olympus. It was the most beautiful place I’ve ever been. We ran in to the mules who were coming down from bringing supplies up to the refuge. The hike up took us almost exactly three hours and forty five minutes. It was almost all steps the whole way up to the refuge. We got there right before 4pm and got spaghetti for dinner and played cards on the deck while watching the sunset. We had another early morning, with most of us awake by 6 am, when we got breakfast (eggs, yogurt, grapes, and bread), and watched the sunrise. We were all ready to go by 8am, and that’s when we hit the trail. It was still so amazing to climb above the refuge and see everything that we had passed the day before. We were getting past the tree line today, so it was really neat to see the shrubbery fade to rocks along our way. 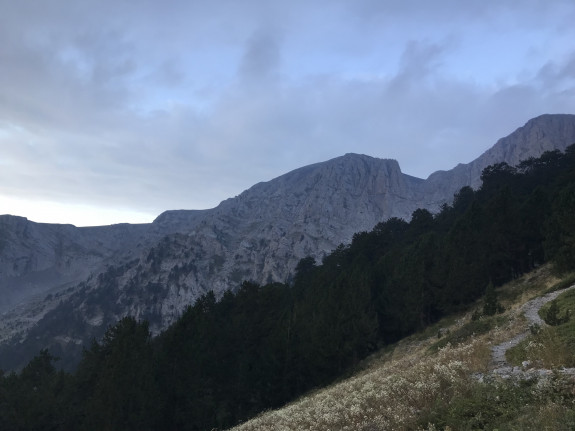 We accidentally took the wrong trail up to Mytikas peak (which some of us are going to go back and attempt in a few years’ time) and saw some fog rolling in, which looked really cool but was also a little nerve-wracking because of all the loose rocks. We went back the way we came and got to the split in the trail again, where we went the right way and made our way up to Skala. Katelin and I stayed there and journaled while the rest of the group made their way over to Skolio. The dogs from the refuge were up at the summit, though, so we pet them and tried to give them some food.

We went back down to the refuge and hung out there for the night, playing some cards and writing postcards to family and friends. We were out for about 6 hours total that day. Saturday, we were on the trail by 7:30 am and were at the Prionia trailhead by 10am. We stopped at a waterfall that’s by the trailhead, which is super pretty. We caught a taxi to Litochoro and walked around a little and got lunch before getting lost on the highway on our way from the bus stop to the train station. We made it, though, and were back in Athens and our apartments by 11pm. 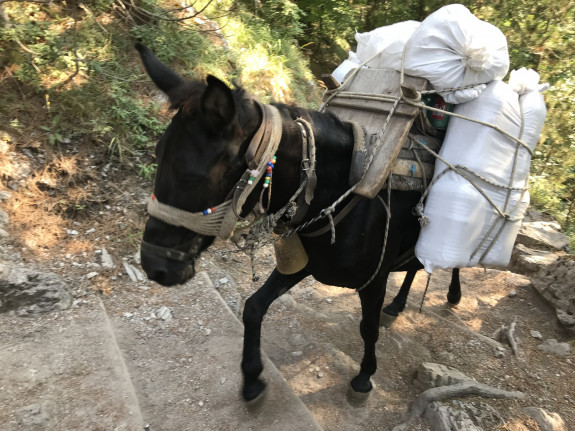 While we were at Olympus, some of our classmates took a day trip to Aegina and Sounio, where they spent the day at the beach and saw the Temple of Poseidon. On Sunday, I joined them to go to the Monastiraki flea market. That place is absolutely massive! And the kind of things they have is surprising- I saw someone’s passport there. We walked by Hadrian’s Library and found some other LC students and went with them to the Zine Art and Book fair at a sketchy building on a side street in Athens. 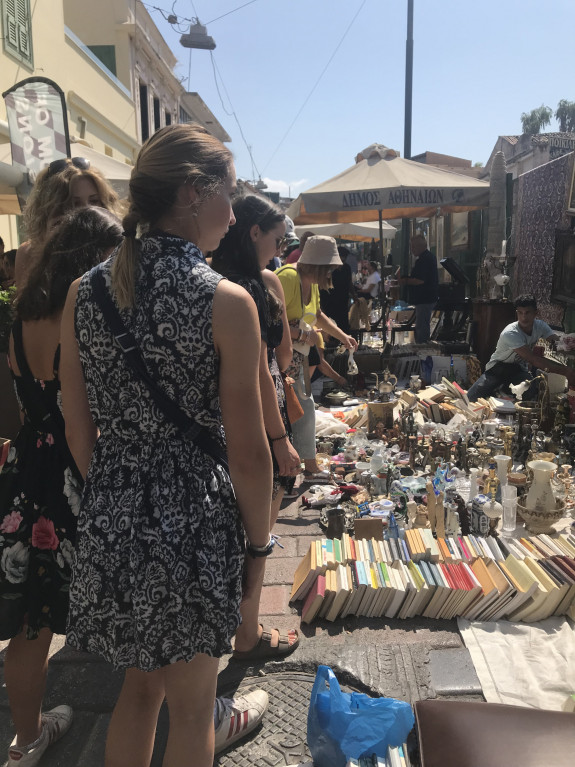 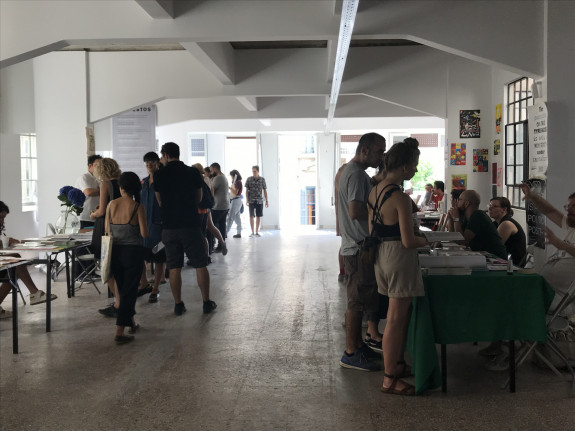 Classes started with a bang on Monday, and we walked all the way up Philopappou Hill for our Topography and Monuments class. We’ve already gone to the Acropolis twice for that class, and we got to go inside the Parthenon!! We went to the Theatre of Dionysus for Attic Tragedy, and spent 2 hours sitting in the sun while talking about the Eumenides (which is kind of cool, because that theatre is where it was first performed). We walked around our neighborhood for Contemporary Greece, and went to the Central Market where they sell the entire half of the body of goat and lamb, and octopus and squid and other fish. Very eventful times in class. 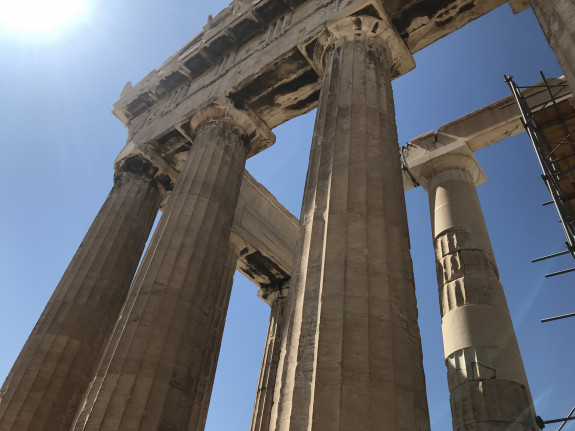 I spent last weekend in Paris visiting my best friend, this weekend I’m in Delphi with Sophie, someone is in Munich, others are in Ithaca and Crete. But it’s back to Athens tomorrow, and in two weeks, we go to Lesvos!

And that’s a brief summary of the adventures that we’ve had in three weeks in Europe.