From the moment I stepped off the plane in New Delhi I was struck with the saturation of color, music, sounds, smells, and culture. Delhi is a vibrant city with an energy like no other place I have ever been. From the local vendors pushing their carts up and down the neighborhood streets calling out their goods for sale in the morning, to the ever-present traffic jams throughout the day, to the bustling neighborhood markets at night, there is constant motion and activity.

I worked at Armachand Mangaldas, the largest law firm in India, in the mergers and acquisitions division. Armachand is a highly respected firm in India whose clients consist mostly of Indian businesses, multinational corporations and Fortune 500 companies, and high-net worth individuals. This is the go-to firm for Western companies that have dealings in the Indian market; it was almost surreal to see the name of the companies I was performing work for on high-dollar transactions. My supervising attorneys were happy to explain Indian law to me, but also made a point to assign me work that involved legal concepts that are relevant in the United States, like drafting memos, conducting research, reviewing documents, and writing letters to clients. One of the highlights of my job was being allowed to assist in on-site due diligence conducted on a railroad that one of our clients was considering purchasing. Interns are usually not allowed to do off-site projects, but due to my background in banking they asked me to help with the financial part of the due diligence by reviewing bank consortium agreements, shareholders statements, and loan documents. I then was given time to meet with the directors of the railroad and ask them questions about discrepancies I found. I was also asked to write a research paper over the Foreign Corrupt Practices Act, an American anti-corruption provision that has a significant impact on international business. Not only did I learn about compliance, but this project also taught me a great deal about the business environment in India where strict regulations like requiring 51 permits from 32 different agencies often lead to bribery. A trip to the Delhi High Court with a litigation team member let me hear cases argued before a judge in a manner I had never quite seen. Arguments can last as long as the lawyer would like and some of the cases dated back to the 1970s due to the notorious court backlog. Interestingly enough, my attorney was in court over a five year old dispute concerning an arbitration agreement, which goes to show that arbitration agreements are not a guarantee in India.

One of my favorite things about Armachand was how friendly and welcoming my co-workers were. I sat with the rest of my team which allowed us to get to know each other through lunches, tea breaks, and chatting throughout the day. We would often share rides home, go to dinner after work, or get together on the weekends. I was literally welcomed into their homes and treated with warmth beyond what I could have ever expected. 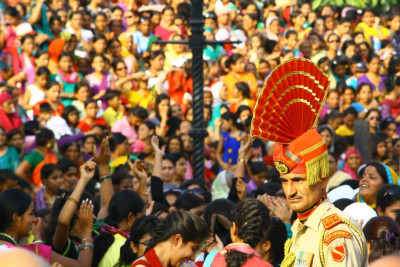 Warm and exuberant hospitality is a common element in India. While at markets people were always asking me if I needed help with anything or would translate in Hindi between me and the shopkeepers. When I got lost people would refuse to give me directions and instead would walk me to where I was going. When one of my friends invited me to have dinner with her and her family, with little notice for her family, I was given one of the best meals of my life and the family kept apologizing that they didn’t have enough time to make something more special. There is also a very large expat community in Delhi who will welcome you with open arms. I met people who worked for the US Embassy and the Australian High Commission, international journalists and activists, and students from France, Germany, and the US.

India is an incredible place for adventure, both with a group and on your own. An entire summer could be spent just exploring Delhi. Old Delhi was one of my favorite places; it is the main market of Delhi and consists of block after block of narrow passageways winding between tall buildings jam packed with people, motorbikes, and cycle rickshaws. I spent hours exploring spice shops, fabric markets, jewelry stores, and sari shops. One day as I was exploring, the monsoon began, and the streets quickly flooded with water rising to my knees. My sandals were swept off my feet and floated away. I had to navigate my way to a sandal shop without shoes, hoping I did not fall into one of the many potholes that was now covered by rushing water while simultaneously trying to avoid the multitude of loose electrical wires dangling into the streets.

Travel outside of Delhi is fairly cheap, and can be done safely with intelligence and preparation. I saw the Taj Mahal in Agra, rode an elephant at the Amber Fort in Jaipur, and saw the Golden Temple in Amritsar. I watched a fire ceremonial dance along the Ganges in Varanasi, and saw the changing of the guards at the Pakistan-Indian border. My favorite trip was to Nepal. Kathmandu is filled with UNESCO World Heritage sites, interesting shops, palaces, religious sites, temples, and monasteries. At one monastery I was asked by a monk if he could ride with me to a nearby stupa. This was the first and probably only time I will ever be able to sit next to a monk in a car, and I spent the twenty minutes absolutely gleeful. I also hiked to the Peace Temple, took a boat ride across Phewa Lake, and went paragliding in Pokhara. While paragliding, my pilot’s cellphone began ringing and he answered it, which was very surreal when you are floating 2000 feet above farms and villages.  It was the paragliding director telling my pilot that my plane out of Pokhara was leaving very soon and they had a special landing area for me with someone waiting to take me to the airport. After landing, I was led to a motorcycle. I had never been on one before, and seeing my hesitation the driver told me that there was no time and to hurry, so I hopped on and clung for dear life as we raced along unpaved, winding cliff roads, weaving around trucks, other cycles, massive potholes, and the occasional cow or goat. The ride was more terrifying than paragliding, but I made it to the airport with minutes to spare.

Going to India, I was not sure what to expect. No matter how much research you do or how many people you talk to there is nothing that can prepare you for complete cultural immersion. India is a rapidly developing country filled with intelligent, kind people who have a sense of pride in their country and a feeling of community that is inspiring. My trip to India provided me with a sense of being part of something greater than myself, new perspectives and appreciation for my life, and learning opportunities I would have not had anywhere else. People often talk about finding yourself in India. I think it is more accurate to say that you discover aspects of yourself that you were never aware of before. My externship in India was the first time that I had ever been abroad. It was an experience of a lifetime, and will undoubtedly be one of the highlights of my time in law school.

Ashley McDonald is a second-year law student from Oklahoma, where she graduated from college with degree in economics and international business. After college, she worked as a personal banker for almost two years before moving to Portland to attend law school at Lewis & Clark. She is currently President of the Business Law Society, an executive board member for International Law Society, a Student Faculty Representative for SBA, and a Kaplan rep.