Lewis & Clark Law School hosted a historic two-day event involving the civil rules process:  a conference on the rulemaking process, and the spring meeting of the Advisory Committee on Civil Rules. The conference also honored the memory of Mark Kravitz, United States District Judge for the District of Connecticut. Judge Kravitz, a pioneer in the rules process, died tragically from amyotrophic lateral sclerosis—Lou Gehrig’s Disease.  Leading judges, scholars, and practitioners from around the country paid tribute to Judge Kravitz and presented scholarly papers.

“The conference went extremely well and was the perfect balance between tributes to Judge Kravitz and substantial, meaty panel discussions,” said Dean Klonoff.

The Civil Rules meeting is held twice a year (one of the meetings is always in Washington).  It was a great honor for Lewis & Clark to host this event on campus. The Federal Judicial Center agreed to co-sponsor the symposium with Lewis & Clark, and The Honorable Jeremy Fogel, Director of the Federal Judicial Center and U.S. District Judge, gave a tribute to Judge Kravitz.

Judge Fogel read aloud his tribute, saying: “Judge Kravitz led with unfailing integrity. There were no hidden agendas, power plays or quick fixes. He encouraged and facilitated a process in which all points of view, even those at the margins of the discussion, were considered fully and thoughtfully.”

All of the tributes to Judge Kravitz were filled with praise and personal discussions of his life and time as a judge.

Professor Ed Cooper, Reporter for the Rules Committee and Professor at University of Michigan Law School, said, “I never saw Mark in a foul humor or heard him utter a cross word—not even when he took a savage elbow to the face in a basketball game on ‘the highest Court in the land.’  By the way, it was Justice Byron White who threw the elbow that put Mark in the infirmary—and then White called the foul on Mark!”

After the symposium, the Advisory Committee on Civil Rules meeting convened to discuss the proposed rules changes, which focused primarily on civil discovery.

“The conference was good for the students and good for the college as a whole.  The people who visited the campus were blown away by the ambiance and the campus grounds,” said Professor Ed Brunet, who participated in the symposium.

Other participants in the symposium were judges, law professors, and attorneys who had the privilege of working with Judge Kravitz.  There were six tributes to Judge Kravitz and two panels discussing the rulemaking process. 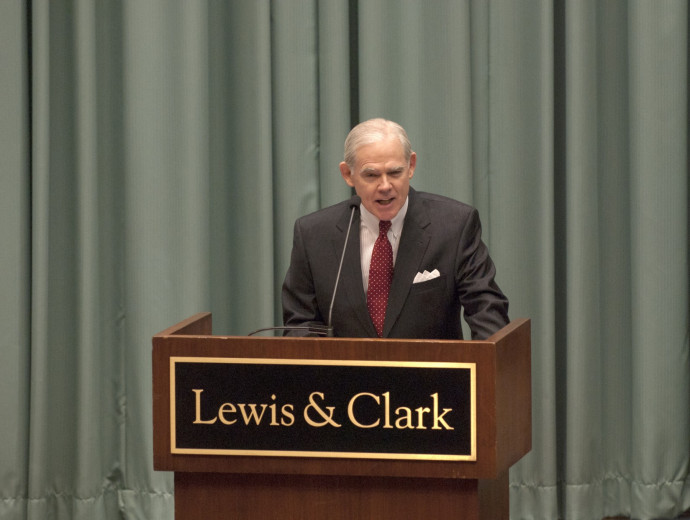