Where in the World Is Bob Klonoff?

Based on discussions with professors from around the world and with West Publishing Company, I determined that there was a great need for an introductory casebook for foreign students interested in learning about U.S. law. First, courses could be offered in schools around the world, taught by visiting U.S. professors or by foreign professors trained at U.S. law schools. Second, short courses could be offered for foreign students who were in the United States to obtain an LL.M. or S.JD degree but who lacked familiarity with U.S. law.

For my 2014-15 sabbatical, I decided to teach U.S. law throughout the world while I put together and tested such a casebook. West Publishing had already signed a contract to publish the book. I wanted to make sure that the cases I selected were suitable for students at any school in the world. The book is designed to replicate the first year law school experience – Socratic method and all. An introductory chapter contains readings on the U.S. legal system, including the common law tradition, the jury system, judicial review, separation of powers, and the federal and state court systems. The book goes on to cover contracts, torts, civil procedure, criminal procedure, criminal law, constitutional law, and property. Actual edited cases are used throughout the book to illustrate crucial concepts. 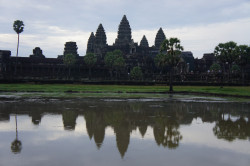 Angkor WatI started my trip in Southeast Asia, teaching at the Royal University of Law & Economics in Phnom Penh, Cambodia. My wife and I then visited Angkor Wat, Thailand, Myanmar, and Vietnam. In Myanmar we visited an orphanage for young monks. The students in Cambodia were extraordinary; despite the country’s tragic history of genocide, these students were dedicated to the rule of law and wanted to move the country forward. 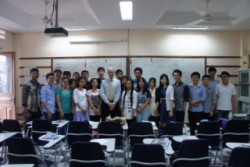 My class in Cambodia

My next stop was Russia. I taught at Herzen University in St. Petersburg. It was interesting to hear the students’ impressions of the Russian legal system and their dream for their country to someday adopt freedoms that we in the United States take for granted. The students were charming, and we had a blast taking “selfies.” 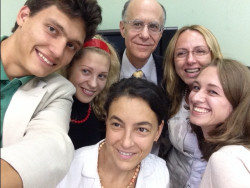 SelfieBecause I taught in the evening, I had plenty of time to visit the many treasures of St. Petersburg. A highlight was three days exploring the unbelievable Hermitage Museum. Prior to arriving in St. Petersburg, I spent several days in Moscow. The Kremlin and the various Moscow museums were awe inspiring. 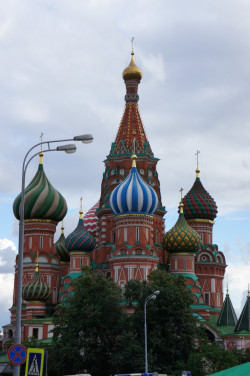 St. Basil's CathedralMy next stop was Shanghai. I taught a course at East China University Law School with Lewis & Clark alum Jun Ge, who is now the top official with Apple in China. I have been to Shanghai many times, but the city is more impressive every time I visit. At over 23 million people, it is the largest city (within city limits) in the world. It is an exciting place, a symbol of China in the 21st century. Jun and I found the students eager to learn about business law in both China and the United States. Many of our students were interested in studying abroad, either in America or Europe.

After China I visited Taipei, Taiwan. I taught at the National Taiwan University, where the students were among the best I have ever instructed. I had many discussions with faculty and staff about China’s status as a world power, and the impact of that situation on Taiwan. I enjoyed sightseeing with LL.M. alums San-Chia Lin and Shu-Fen Chiang. A highlight of my Taipei visit was when I accidentally left my wallet in a cab. Fortunately, I had my National Taiwan University ID in my wallet. Within 15 minutes of leaving the cab, the driver had returned my wallet to the school, with all of my cash and credit cards intact. This act of kindness and honesty meant a lot to me.

Following Taiwan I stopped at Boracay, the Philippines, one of the world’s most beautiful beaches (and regularly ranked the top beach in Asia, beating out Bali and all of the beaches in Thailand). The sunsets were stunning and the water was pristine – clear, beautiful turquoise with white powdery sand that does not get warm even during the hottest days. 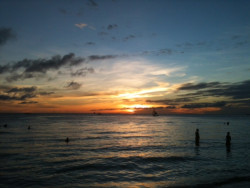 BoracayI then taught at the Universidad Sergio Arboleda in Bogota and Santa Marta, Colombia. Between my teaching gigs in these two cities, my wife Heidi and I spent five glorious days in beautiful, colorful Cartagena. (Cartagena is a favorite of Bill and Hillary Clinton, who vacation there three times a year. They are regarded as true heroes throughout Colombia.) As a special treat, the university arranged for us to have spa treatments at the city’s premier hotel. The highlight was a “chocolate wrap,” where we were literally covered from head to toe with rich, aromatic chocolate sauce. 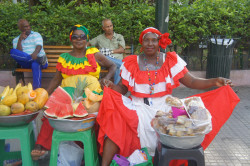 CartagenaNext on my schedule for teaching are Australia (followed by a visit to New Zealand), Italy (both Florence and Trento), and Madrid. Heidi and I plan to visit Portugal and Morocco, as well. I will also be visiting Istanbul in May, at which time I will be inducted into the International Association of Procedural Law at IAPL’s annual meeting.

In short, this sabbatical year has truly been a dream come true.