I started the Green Energy Institute to help support renewable energy development. We have grown quickly during our short tenure, and we now have a staff of two attorneys, two LL.M Energy Fellows, and one undergraduate intern, and they do amazing work. Our team develops and advocates for policy reforms that will enable a swift transition away from fossil fuels and towards renewable energy, and we focus on policy changes that will promote the creation of a 100% renewable power grid. Obviously, we have big goals, but I personally believe they are achievable. Indeed, I think 100% renewable energy is inevitable; the real questions are how and when we will get there and whether we will pursue intelligent approaches to reach our inevitable destination. The Green Energy Institute aims to ensure we get there as a quickly and cleverly as possible. Read more… 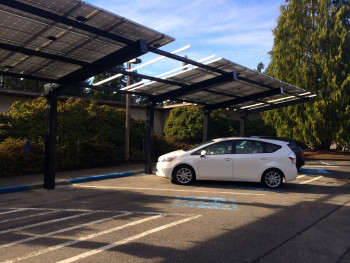 This winter, GEI and Lewis & Clark’s Facilities Services team worked together to install a solar photovoltaic system in the law school parking lot. The 10 kilowatt system, which was funded by a generous grant from the Oregon Community Foundation, is estimated to produce 11,494 kilowatt-hours of electricity a year. The panels are mounted on a parking shade structure over the law school’s handicapped parking spaces. The system’s design demonstrates the feasibility of installing solar in constrained areas, including heavily wooded areas like the law school campus. 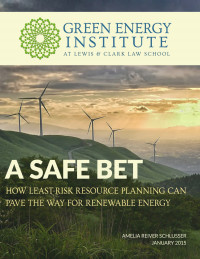 A Safe Bet: How Least-Risk Resource Planning Can Pave the Way for Renewable Energy

Solar Building Standards: How American Cities Can Lay Foundations for a New Generation of Solar Development

Staff Attorney Nick Lawton issued a report on solar building standards, which require developers to install solar power on new or renovated buildings. So far, two cities in California have enacted solar building standards. These policies can increase property values, lower power bills, increase resiliency to power outages, and facilitate management of the energy grid—all while reducing the costs of solar power. They can also provide a stable, long-term policy framework for solar development. The report argues that as the costs of solar power continue to decline and its benefits continue to become increasingly clear, more cities should adopt solar building standards. Learn more… 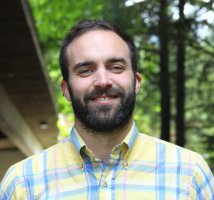 I attended the Rocky Mountain Mineral Law Foundation’s Special Institute on Climate Change Law and Regulations in New Orleans. I was surprised to find that after years of resisting carbon regulation, the extractive industries appear to accept that they will soon have to limit their greenhouse gas emissions. Ironically enough, it seems that a growing voice within the oil, gas and mining industries would prefer the comparatively easy implementation and financial certainty of a carbon tax or cap-and-trade system over more complex carbon regulation under the Clean Air Act.

Renewable Energy in the Pacific Northwest and Beyond

Portland recently became the second city in the nation to harness the power of gravity-fed drinking water and turn it into clean, hydroelectric energy. The relatively new technology generates electricity using turbines that fit within the city’s 3.5-foot diameter drinking water pipes. The city then sells the power to Portland General Electric under a power purchase agreement. The in-pipe technology offers several potential benefits in addition to adding more clean energy to the grid, including reducing environmental impacts and increasing the structural integrity of the pipe system. Better yet, the electricity produced by the system generates revenue to fund additional infrastructure improvements.  To learn more, see Energy Fellow Kyra Hill’s blog post on our Charged Debate blog.

IN 42 U.S. CITIES, DISTRIBUTED SOLAR COSTS LESS THAN ELECTRICITY FROM THE GRID

The solar energy market is booming across the country, and solar photovoltaics have become one of the best investments a homeowner can make. Solar cells increase retail home values and a recent study by the North Carolina Clean Energy Technology Center  found that solar is now cheaper than residential electricity purchases in 42 of the 50 largest cities in the U.S. Known for their happy people and gloomy skies, both Portland, OR and Seattle, WA make the list of the 50 largest cities where solar offers the best financial value. The declining hardware costs for solar energy and the proliferation of solar installation companies has led to increased accessibility of solar technology across the country. With the current state of solar energy looking bright, findings like these will continue to help push solar industry forward and incentivise future investment in photovoltaic technology. - Kelsey Kahn, GEI Intern

For more information on GEI’s work please visit our website