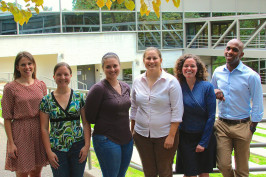 As I’m writing this letter, the governments of the world are in Paris negotiating the next international climate agreement. For the first time I can remember, participants and observers of the climate negotiations feel optimistic about the process and the potential outcome. We will soon have a broad global commitment reflecting the near-universal belief that humans must act quickly and decisively to address climate change. While the agreement could undoubtedly be stronger, we should celebrate this milestone.

We also have a lot to celebrate this year in the world of renewable energy development. Wind and solar energy deployment both increased, while their costs dropped. Wind is already cheaper than most other energy sources, even natural gas in some places, and solar costs have come down steadily. As prices have dropped, new renewable energy supporters have emerged. Some utilities that previously resisted renewable power have begun to invest in it as a low-cost option to expensive and uncertain fossil fuels. Meanwhile, renewable pioneers like Elon Musk continue to innovate in critical areas, like energy storage, and could bring us the game-changing technology we need to quickly transition to a renewable power grid.

On the regulatory landscape in the United States, 2015 was also a huge year in some key respects. Hawaii enacted a 100% renewable power target for 2045, and energy-hungry California upped its own renewable energy mandate to 50% by 2030. Finally, the Environmental Protection Agency finalized the Clean Power Plan, which will require existing fossil fuel-fired power plants to reduce their carbon dioxide emissions and could promote increased renewable energy development and use. All in all, 2015 was a very good year!

But as good as 2015 was, we have a lot of work to do to obtain all of our electricity from renewable sources, as we at the Green Energy Institute believe we should. 2015 has shown the potential of technology and policy to chart the right course, but it will take much more than this year’s successes to lead to the necessary transformation we need.

Above all, we in the renewable energy policy world need to do much more strategic and collaborative planning. For the past several years, renewable energy policy has been unnecessarily contentious, largely because of the uncertainty involved in the energy transition. However, the transition to renewable power offers countless opportunities and benefits, and strategic planning can help alleviate many of the unnecessary concerns that lead to fractious debates. In 2016, the Green Energy Institute will ramp up these planning efforts, and we hope you’ll support us in this endeavor! Thanks for all of your support for the Green Energy Institute.