Following a 2016 law school master plan recommendation, Gantenbein, the glass building affectionately known as the “Fishbowl,” is being restored to its former architectural splendor. 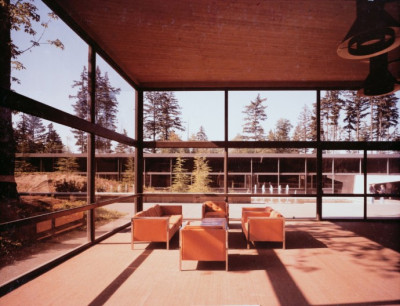 Gantenbein on a sunny day in 1970.Gantenbein was one of the first buildings on the law school campus and initially served as the student lounge. A beautiful example of northwest mid-century modern architecture, the building was originally conceived as a window onto the campus.

The renovation will gut the dated and under-utilized interior to create a central, modernized, open space that welcomes new and prospective students, a fitting space for Law School Admissions and Career Services offices and meeting spaces.

Named for the Gantenbein family, the building is an enduring tribute to their contributions to the law school. Judge Calvin U. Gantenbein, a decorated Spanish-American War veteran, served as its first dean. During the Second World War, Calvin’s youngest son, Judge John Flint Gantenbein ’34, took sole proprietorship of the law school, keeping it afloat through loans and the sale of his own house. (During the day, he worked as an attorney in his own law office, as well as fulfilling the roles of law school registrar and librarian. At night, he worked a graveyard shift at the local shipyards to help keep Northwestern College of Law afloat.) Gantenbein stepped in to shepherd the law school one last time during and immediately following the 1965 merger with Lewis & Clark College, working with law school trustees to help broker the arrangement.