“Crystalling the Legacy”: An Introduction

Professor Emeritus Ron Lansing recently published Crystalling the Legacy, detailing the accreditation era of the Law School. Reprinted below, with permission from the author, is the book’s introduction, which offers an account of law school in the mid-1960s and Lansing’s entry into teaching. When he retired from classroom teaching several years ago, it was noted that at least half of the Oregon State Bar members of the time were at one point or another Lansing’s students. 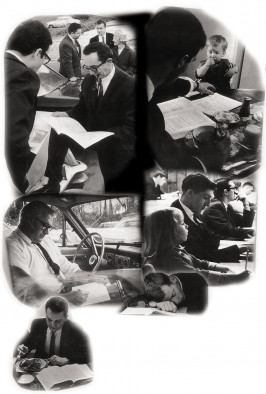 Over half of my life I have been a law professor and sometimes have to remind myself that I used to do other things. I was thirty-one when I first reached out to do law teaching. On January 15, 1963, during a lull in the day’s practice of law, I sent a letter expressing my interest in being a part-time instructor at Northwestern College of Law, a night school in downtown Portland. It was presumptuous of me, for I had only been out of law school for about thirty months and was then a young associate in the law offices of Shuler, Sayre, Winfree, and Rankin. My letter went to Judge James W. Crawford, dean of the school, and he replied one day later. While there were no vacancies on the faculty at the present time, he wanted to know what fields of law I was qualified to teach. I wrote back and listed as many as ten specific courses and then had the audacity to conclude with: “and any special courses derived therefrom.”

That wide swath fancied myself as a devotee of Law with a nonchalance toward laws. It did not matter what laws were taught; what had to be learned was Law itself, and the latter could spring from any of its curricular corners. I favored jurisprudence—a penchant for the whole instead of its parts—what Oliver Wendell Holmes, Jr. characterized as “the seamless web” and the “echoes of the infinite.” I confess it was not a good attitude in law practice. In a law world of increasing complexity and specialization, a Law synthesizer becomes a non-conformist.

I never heard back from Judge Crawford nor did I try to resurrect what had been merely a fleeting fancy. Nevertheless, that idle dip fomented a lifetime immersion. Two and one-half years transpired before the taste came again. By this time I was now a partner in the law firm of Bailey, Swink, Haas, and Lansing. I had taken the place of Sid Lezak, whom President Kennedy had appointed U.S. Attorney for Oregon. Sometime in the summer of 1965, Judge John Flint Gantenbein invited me into his chambers after the trial of a case. He said he was Northwestern’s Registrar and kept a file of those who had expressed interest in being a part-time law instructor and asked if I was still interested. He summarized the school’s history and his lifetime with it—a life span that began as a child at his father’s table. In 1915, the father, Calvin, as dean of the University of Oregon Law Department, took over the proprietorship of the downtown Portland law location when the university decided to move its law school to Eugene, Oregon. The son, John Flint, from those days on, fused his life with his father’s school, first as a law student and graduate, then as the school’s registrar, then one of its owners, then as the sole proprietor. Now here in his chambers, he told me that he had in recent years transferred his proprietorship to a nonprofit corporation headed by five trustees: Jack H. Cairns, Jack L. Kennedy, Thomas H. Tongue, Judge Crawford, and himself. He further confided that the Northwestern trustees had been shopping for merger with one of Portland’s four main undergraduate schools of higher education: Portland State University, University of Portland, Reed College, and Lewis & Clark College.

The judge said he was not getting younger nor was his part-time faculty. They were venerable and successful judges, lawyers, and teachers. What experience lacks, however, is continuity, he said; their success did not provide succession. He did not want to see his father’s school wither. He needed younger teachers who might carry on. “Would you like to do so? I need faculty who will stick around.”

As a young lawyer, I was filled with the bite of energy and involved in far too much extra-activity: Portland City Club, Portland Opera Association, Unitarian Fellowship, Oregon State Bar committees, Multnomah County Bar continuing legal education, and other community and neighborhood efforts. Then too, in my law firm I was given the role of business manager. I was also involved in a precedent-setting, land zoning case [Smith vs. Washington County, 241 OR 380 (1965)]. That, plus family time with an equally energetic wife beginning her work as a CPA and three children (ages four, five, and eight), inclined me to resist taking on another responsibility.

Those who remember him will attest that Judge Gantenbein had the kindest of faces and a soul to match. He sympathized with my reluctance but said he was simply urging me to update my 1963 application. To such curry and non-commital, I was an easy mark. In a June 29 letter, I renewed my request for an instructorship.

That 1965 re-application, like its 1963 predecessor, bore no immediate fruit. Northwestern got side-tracked. Its trustees became deeply involved in merger negotiations. On September 12, 1965, those involvements culminated in a contract between two pioneer schools in Oregon history. Henceforth, Northwestern College of Law would be known as Northwestern School of Law of Lewis & Clark College—the former tracing its origins to 1883 as the Law department of the University of Oregon and the latter evolving from Albany College founded in 1867.

For the next year, the name was the only ostensible change in the law school’s operation. Judge Gantenbein became the part-time interim dean and remained so until a professional educator could be found. The school continued to operate in the Giesy Building in downtown Portland just a few blocks from my office in the Corbett Building. At the surface, the merger for the time being seemed no more than a ripple upon which my re-application was adrift. No one, including me, could see what lay beneath those still waters.

Then, in August 1966, Judge Gantenbein contacted me again to see if I would be able to teach the Code Pleading course at the law school. He said that Lewis & Clark College had appointed him caretaking dean; that a new dean was not yet in place; that the previous Code Pleading teacher, Phil Levin, a prominent appellate lawyer, had died; that the school needed a replacement at once; that I had been picked from my letter of application and résumé.

That nighttime, part time education was my first unique impression in law teaching. The commitment was awesome. An ancient adage in Law study is that Law is a “jealous mistress.” For the night law student that mistress or master competes with family and job. Dovetailing those devotions with school discipline was a multi-tasking worthy of wonder.

The fact that Levin had died many months prior indicated that I had not been a first choice nor likely a second or third. While it was not flattering to be a last minute recruit, that was overcome by the honor of serving in a part-time faculty that over eight decades had been the pick of the Oregon bench and bar: supreme court judges, trial judges, national and state legislators, district attorneys, senior law partners, Bar presidents, and distinguished practitioners who had carried and handed down the traditions of what had been called “Northwestern’s Living Law.” I did not hesitate to accept the Gantenbein offer.

As of 1965-66, part-time instructors were paid a paltry $225 per semester credit hour and $1.00 for each exam graded. At the start of my 1966-67 academic year, the pittance was raised a mite: $400 per semester hour that included exam grading. I was required to teach two nights each week for thirty-two weeks. Each class evening, I spent four hours at the work—three hours of preparation beginning at 6:00 p.m. and one hour of classroom contact beginning at 9:00 p.m. There was no time to come home after my law practice hours. So, I tabled at a downtown restaurant, partaking of bread, notes, and text and managed to stay just twenty pages ahead of the students in the Code Pleading casebook.

Classes were held on the top floors of the three-story Giesy Building at the northeast corner of SW Park and Stark Streets—a structure destined to be razed to make way for downtown Portland development. It was next door to the luxurious, multi-storied, venerable Benson Hotel with its brilliant Crystal Ballroom—a marked contrast to the dingy, dim-lit classroom just walls away. The haunts of the law school were every bit indicative of valid education in vile surroundings, made so by affording opportunity at affordable prices. I was informed that 78 percent of the night students were married, 61 percent of them had two children, and 93 percent had regular daytime jobs. Their average age was 27 years. I was only six years older than that average, and many of them were far older than I.

That nighttime, part time education was my first unique impression in law teaching. The commitment was awesome. An ancient adage in Law study is that Law is a “jealous mistress.” For the night law student that mistress or master competes with family and job. Dovetailing those devotions with school discipline was a multi-tasking worthy of wonder.

As their night teacher, I began to feel the crunch myself. By the time I arrived home after a night of teaching, it was 10:30 p.m.—time to peek in on the pillowed and tousled heads of my children already tucked away. None of the foregoing agenda took into account the tedious hours of preparing, evaluating, and grading final semester exams. For all of that, I was paid at the end of the academic year $1,600. But the real “pay” was something hard to put into words. Fascination did not quite express it. It was attraction mingled with a satisfaction that all teachers must get when completing the circle by giving back what was once received.

To read more, you can purchase Crystalling the Legacy from the Law School bookstore or through the ﻿alumni website.