Matt Bergman ’89 spoke about his gift to create a fund that provides travel scholarships for students interviewing for federal judicial clerkships. Bergman was inspired by the two years he spent as law clerk to Judge Baldock of the U.S. Court of Appeals, Tenth Circuit and how this experience was critical in shaping Bergman’s future legal career. His generosity allows Lewis & Clark law students to explore opportunities that they might not be able otherwise to afford.

Jon Cole ’76 and his wife, Barbara, established an endowed scholarship in honor of Cole’s favorite professor and mentor, Doug Newell. Cole traveled from Southern California to express this gratitude in person to Newell and credited his mentor for contributing to his successful career. The creation of the Professor Doug Newell Scholarship honors Newell in perpetuity, while providing a scholarship to a current law student. Jon and Barbara Cole are joined by Newell and by Cole’s sister, Professor Toni Berres-Paul, when they review the applications and select a recipient each year. Cole was introduced to the first recipient of the Professor Doug Newell Scholarship, Robert Scott ’11, and also to the 2011-12 recipient, Chris Rifer ’12, at the dinner.

Holly Rudolph ’10 created a scholarship to provide tuition assistance this fall to a single parent of an older child. Herself a single mother to a teenage son, she explained that this is exactly the type of scholarship she would have appreciated receiving while completing law school. Her goal is to provide “a little breathing room” for a law student and his or her child “to go to the movies or go skiing together.” Rudolph shared that this award is her way of recognizing another parent who endures streams of chatter intermixed with intractable silences, of thanking Lewis & Clark for the best three years of her life, and of acknowledging to the world that her son, Jake, is awesome.

Llamilet “Llami” Gutierrez ’12 is the recipient of the Roosevelt Robinson Memorial Scholarship and the Andrea Swanner Redding Scholarship. Gutierrez told the audience that there were times during her first year when she questioned her abilities. Receiving these scholarships, she said, helped squelch those doubts and made her feel accomplished and valued in the Oregon legal community. Gutierrez thanked the donors and the selection committees for their continued commitment to Lewis & Clark law students.

By the end of the evening, it was abundantly clear that donor-funded scholarships provide much more than financial support to students. Such scholarships are a constant reminder that recognizing and encouraging hard work and dedication benefit the entire legal community. The Law School is proud to count loyal scholarship donors among its supporters, and proud of the students who receive these awards. 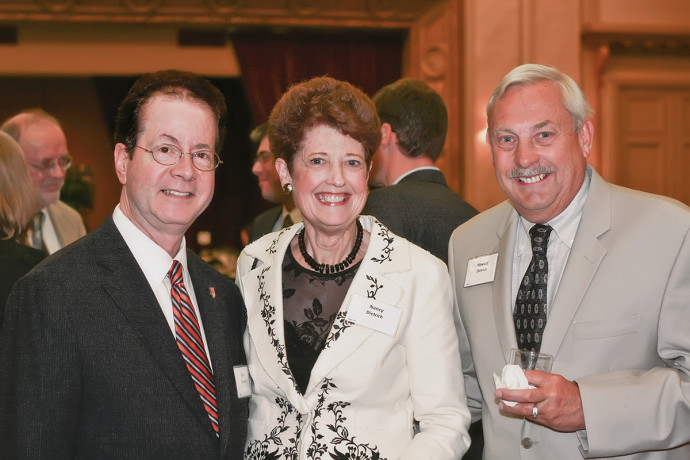