This fall, Sarah saw her former coworkers again while attending the 2012 U.N. Framework Convention Climate Change Conference in Doha, Qatar. Only now, she says, “they were asking me about the negotiations I was involved with that they couldn’t get into. My ultimate career goal was to be seated around negotiating tables and representing a country negotiating solutions to global environmental problems, and I actually did it in law school. It was above and beyond anything I could have imagined.”

The negotiations of 2012 were not Sarah’s first. In 2011, she attended the U.N. Climate Change Conference in Durban, South Africa, with other IELP students and Professors Chris Wold JD ’90 and Erica Lyman JD ’05. Students provided support to the Alliance of Small Island States (AOSIS), a group of 43 Pacific and Caribbean island nations. Individually the countries are too small to have any real negotiating power on their own, but by banding together they gain leverage in the climate change negotiations. Issues related to climate change are of critical importance for these islands; as Sarah says, “they’re fighting for their very existence.” In Durban, the students supported AOSIS by providing legal analyses and other information that delegates could use during floor debates, and even by drafting language for decisions that would become part of international law if adopted.

Sarah’s experience with IELP in Durban helped her secure an externship with Islands First, a nonprofit that also provides support to island countries. There, she worked with the country of Nauru’s U.N. Mission, supporting Nauru in its role as chair of AOSIS. She returned to the 2012 negotiations in Doha with Islands First. However, once at the conference, Sarah learned that the Pacific island nation of Palau needed assistance. She went to work for that country, only this time as a delegate. She was now representing a nation in closed-door negotiations—her dream come true. 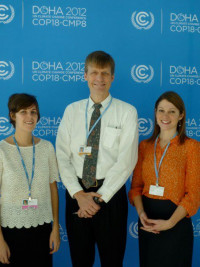 Students Sarah Perelstein (left) and Amelia Schlusser (right) with Professor Chris Wold (center).“Palau was really happy to have student help,” Sarah says, noting that her legal experience was critically important to the delegation. There were seven different negotiations being held at once in Doha. Because a typhoon had just hit Palau, the country had sent only two negotiators. This is where Sarah entered. As the only member of the delegation with legal experience, she represented Palau in the Kyoto Protocol negotiations, where the outcome would be binding and enforceable.

“The negotiations confirmed my desire to be a lawyer; in this environment, lawyers were really needed to give voice to the islands’ interests,” Sarah says. “Understanding the legal issues is the only way to fully understand all of the issues being negotiated. Not everyone at the table had a legal background. But I had discussed these issues already in class and I felt I had something to contribute during the strategy meetings.”

At the beginning of the negotiations, meetings were open, but as those became more contentious and focused on detailed issues, only delegates were allowed in. “I was sitting in the room watching countries go line by line and draft the text for the future of the Kyoto Protocol. It was my first time being able to see something start as a blank page and end up as international law,” Sarah says. “Seeing the dynamics in person was really interesting. You can read about it, but when you’re in the room, you see the politics, the power plays, and the intimidation that the smaller countries deal with at the negotiating table.”

Sarah wasn’t the only IELP student participating in the Doha negotiations. Third-year student Amelia Schlusser attended the conference with IELP, in support of AOSIS. She provided legal support and researched a number of important issues. “One of the assignments I worked on involved researching specific effects of climate change on countries negotiating with AOSIS. Having that information helps AOSIS delegates strategically focus their negotiations with other countries.” She also produced research on food security and how it would be impacted globally by climate change.

Five months later, Amelia participated in another international negotiation with IELP: the 2013 meeting of the Convention on International Trade in Endangered Species, or CITES. CITES is a multilateral treaty that regulates international trade in wild species of animals and plants for their protection. 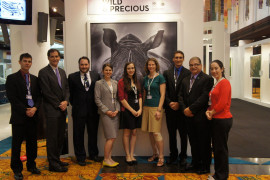 The IELP team at CITESFor more than a decade, IELP professors and students have attended the CITES negotiations to work with the government officials and conservation organizations. Students take an active role in educating government delegates on the issues that each student has worked on. Additionally, under the supervision of IELP’s Wold and Lyman, students provide support to governments by briefing them on key issues, providing research, and helping delegates interpret different legal issues in the treaty.

IELP’s role in the meetings “forces you to talk to people from all over the world and from different cultures,” says Amelia. “You get to interact with people you wouldn’t have access to elsewhere. We had the opportunity to meet and talk with the director of the U.S. Fish and Wildlife Service for over an hour. In the United States, it would be difficult to get 10 minutes with him. We also worked closely with several other delegations. It was also really enlightening to work with people who are doing on-the-ground conservation work, such as the International Association of Rangers, who witness poaching firsthand. Many participants really value IELP’s work because it can be hard to understand the convention without the benefit of legal knowledge or experience.” 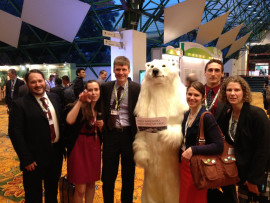 “We had some late nights researching the issues up for debate, but it was really rewarding to hear delegates speaking on the floor and using the information we provided to them,” Amelia says. “You actually get to see the effects of your work.”