On April 4, Lewis & Clark provided three law students with an extraordinary opportunity—the chance to argue a case in front of the 17th Chief Justice of the United States.

Chief Justice John G. Roberts, Jr., was invited to campus by Robert Klonoff, dean of Lewis & Clark Law School, and was part of a team of three judges asked to weigh in on the school’s inaugural Environmental Moot Court Advocate of the Year competition. Joining the Chief Justice were U. S. Ninth Circuit Judge Diarmuid F. O’Scannlain, and U.S. District Judge Anna Brown JD ‘80. The Chief Justice also made surprise visits to three classrooms earlier in the day before the event.

The competition’s participants—third-year law students Maggie Hall, Meredith Price, and Andy Erickson—served on a moot court team together in February, placing second among 75 schools at the National Environmental Moot Court competition at Pace University Law School, in New York.. Lewis and Clark has an incredible record at Pace, having won the competition seven times in the last 20 years, and having competed in the finals (top three) on eight other occasions. No other school has won more than twice. According to Professor Craig Johnston, the team’s head coach, “it was this fantastic record of success that made this year’s event possible.” He attributed this long record of excellence to his co-coaches, Professors Allison LaPlante and Dan Mensher, to the long-standing support of the rest of the faculty, and to a steady stream of amazing students who have been willing to put in the work to both hone their skills and master the relevant legal issues.

At the April 4 event they competed against each other in front of an audience of 500, representing opposing sides of a fictional Clean Water Act case. Arguing in front of a sitting Chief Justice of the United States was an extraordinary experience for the three students. “It was pretty intense. When you’re arguing a moot court case and talking about Supreme Court precedents, the judges usually haven’t authored opinions in those cases,” Meredith noted, reflecting on the competition. “It added a whole new layer of pressure to understand the decisions.” Even though the argument was intense, there were light-hearted moments. “We had a lively panel,” Maggie noted, “and the judges even made jokes with us, just like you sometimes hear in Supreme Court oral arguments. That helped us relax and keep the tone more conversational.” 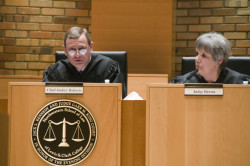 Chief Justice Roberts questioning the moot court competitorsOverall, the three enjoyed the special nature of the competition. “In a way it was a relief being in front of real judges, instead of just moot court judges. Moot court judges don’t just judge you on your legal argument; they’re judging you on a checklist of moot court criteria. Did you get to all of the issues? Were your transitions smooth?” Andy observed. “Real judges don’t have those same concerns; they’re not worried about the score sheet. They just want to test your legal reasoning.” This changed how the advocates prepared, Maggie added, “I was more concerned with prioritizing issues that would matter in a real case, or that my client would want me to cover, than a typical moot court problem. We also had to let go of preconceived ideas of where the arguments would go, because what matters in a real argument is thoroughly addressing the Court’s concerns.”

The students were also impressed with the amount of preparation the three judges put into the competition. “Having the judges read the briefs really made this competition a lot different,” Meredith recalled. “I was surprised how often the judges referenced our briefs during the event. That doesn’t happen in a typical moot court. I was glad that I had read my brief again that morning.” Earlier in the day, the Chief Justice had even studied pictures of the three students so that he could recognize them by name.

The competitors all agreed that they were well prepared for the event by Law School professors. “A lot of faculty took time out of their busy schedules to hold one or even several practice rounds with us”, Andy remembered. Meredith added, “That’s what really makes Lewis and Clark stand out; the professors are always ready to help out. We all felt very prepared for the competition because our professors had already torn us apart in practice many times.” 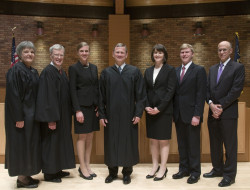 From left: Judge Brown, Judge O'Scannlain, Maggie Hall, Chief Justice Roberts, Meredith Price, Andy Erickson, and Dean KlonoffThe competition was not only a memorable experience, according to Meredith, but also a constructive one for their careers.  “It was a once in a lifetime opportunity as a law student to be able to argue in front of a sitting Chief Justice of the United States, a US District Court Judge, and a 9thCircuit Court of Appeals Judge. Not everyone will get to argue in front of the Supreme Court, but a lot will argue in front of appellate courts in the future so it’s great practical experience, on top of being a great honor.” Maggie added that having this experience under their belts certainly will make their future real-life oral arguments less intimidating.

In the end, law student Meredith Price BA ’07 was declared the winner. After she graduates in May, Price will clerk for U.S. District Judge Michael Simon in Portland. Andy will clerk for the Alaska Supreme Court, and Maggie will do a fellowship with the Los Angeles Waterkeeper.

In the end, it was an extraordinary evening for all. In the words of Professor Johnston, it was “certainly one of the most pride-inducing events in the history of the Law School.”