On May 18, 2019, over 150 graduates received their Juris Doctor degrees, with eight graduates receiving a Master of Studies in Law, and seventeen earning a Masters of Law degree in Animal Law or Environmental, Natural Resources & Energy Law.  Fifty-seven students earned academic honors and thirty-five were inducted into the Cornelius Honor Society, noting their commitment to the law school community.

The Honorable Michael McShane ’88, Federal Judge on the U.S. District Court for the District of Oregon, delivered the commencement speech to the graduates. He inspired the graduates with his tale of “the accidental jurist” as he humbly called himself.  Sharing his journey from Lewis & Clark Law School graduate to a federal judge, he reminisced about how he “found his voice” while serving as a public defender. He had three points of advice to law students: “sometimes luck is more important than confidence; sometimes endurance is more important than brains; and it is perfectly acceptable to do the right things for the wrong reasons.” 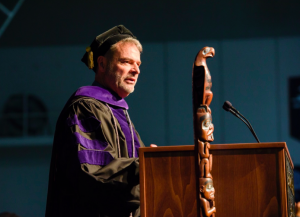 Judge McShane addresses the class of 2019.

Judge McShane was nominated to the bench by President Obama in 2012 and confirmed in 2013.  He received his JD from Lewis & Clark Law School in 1988, and afterwards became the supervisor of the felony section at the Metropolitan Public Defender’s Office in Portland. As a criminal defense attorney, he gained the public spotlight representing the getaway driver in the Tonya Harding prosecution. He joined the Multnomah County Circuit Court in 1997, where he presided over 25 capital cases. In 2014, Judge McShane’s opinion in Geiger v. Kitzhaber paved the way for all Oregonians to marry the partner of their choice. 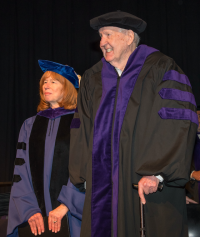 Paul Casey Receives an honorary degree.Law School Dean Jennifer Johnson joined President Wim Wiewel in conferring honorary degrees on Judge McShane and on Paul Casey. Casey was recognized for providing multiple student scholarships, as well as for his support for the Henry Casey Professorship (named after his father) which have had a great impact on Lewis & Clark law students and faculty.

Zach Nelson ’19 spoke on behalf of all of the students, reminiscing about the hard journey, “we supported one another and learned that success in law school is not a zero-sum game.” 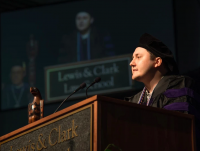 Anjana Kumar ’19 presented the Leo Levenson Award to Professor Sandy Patrick “for her ardent dedication to her students, not only ensuring that they are prepared to be excellent attorneys, but that they take care of themselves along the way.” Professor Patrick teaches Lawyering, Advanced Legal Writing, Persuasion, and Pre-bar Strategies and Skills at Lewis & Clark Law School.

Many graduates with small children attended the Children’s Commencement, following the official commencement ceremony, as a way of including children in the accomplishment of their parents.  Proud family members and friends joined graduates and faculty at a reception at the law school.