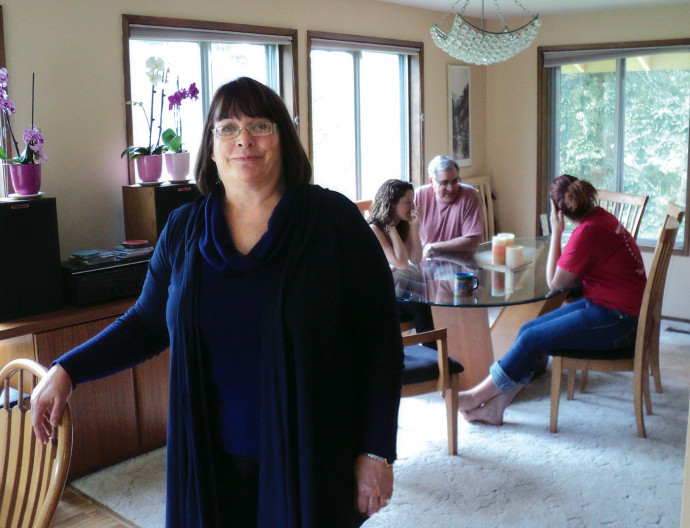 Third-year law student Sandy Kuenzi sits at her glass dining room table, wiping fingerprints from the underside of the transparent surface. “Sometimes I think she only knows black and white,” she says, referring to 13-year-old daughter Stephanie’s habit of cleaning just the top surface of the glass and failing to look further. But Kuenzi knows that, everything considered, her daughter has come a long way. Her entire family has.

For 25 years Kuenzi worked with many notable and worthwhile organizations, helping women and children. But, she says, she never felt her efforts were directly contributing to the lives of others. “Sure, I’ve cleaned out cockroach-infested apartments, built homes, clothed and coached others for job interviews, taught people how to build and live within a budget, but that isn’t the same thing as putting your money where your mouth is.”

Stephanie, along with her sisters Jennifer, Shanna, and Amanda, were growing up in the foster care system in Florida. “Everything bad that you hear about in foster home situations happened to these girls,” Kuenzi says. She knew about the sisters through a distant family connection—her stepfather was their great-grandfather. Kuenzi and her husband had successfully raised four children. “Mike and I thought that if [the girls] could see two people who love each other so much and were willing to take care of them, things in their lives would settle down,” she says. “We thought we could provide them with an environment that was stable.” The Kuenzis decided to step up.

It was time to be a safe haven and give them a chance just to be little/big girls.Sandy Kuenzi

“Adopting the girls seemed like a way to really help change at least one life,” Kuenzi says. The decision to be adopted or taken into guardianship was left up to the girls. “Each one had to decide whether they wanted to try to form a new version of our existing family or whether they just wanted a safe and clean place to live until they turned 18.” In a Florida courtroom, the Kuenzis and the girls all answered questions from the judge, a guardian ad litem, and attorneys. They listened as caseworkers and therapists were also questioned. “Then we had to vow to be a family,” Kuenzi remembers of that fateful day. “It was a moving experience.”

The Kuenzis adopted Jennifer, now 14, and Shanna, now 16, in late 2009. Stephanie joined the family a few months later. Amanda, the oldest, didn’t want to move away from her friends so close to graduating high school. She chose to stay behind in Florida in foster care.

No matter what the girls had chosen, Kuenzi says, the roles she and Mike would play in their lives would have been very similar. “We would never be just a bed-and-meal plan,” she says. “It was time to be a safe haven and give them a chance just to be little/big girls.”

Picking up the Pieces

The trauma Kuenzi’s daughters have been through has been a difficult and costly experience for the family to overcome. The girls’ biological mother was not stable enough to raise them. After she locked them alone in a car on a hot Florida day, the four sisters were placed in a group home that Kuenzi says was surrounded by boys, drugs, and other behavior that was not suitable for young girls. The girls then were adopted by a couple who, it was eventually discovered, abused them.

A lifetime of abandonment and neglect left them emotionally stunted, as well. “The first night I asked Shanna to set the table. I was standing in the kitchen and I didn’t hear anything in the next room. I thought ‘Oh great! I’m getting teenage attitude already.’ But when I walked out of the kitchen, I saw she was just standing there over the table with a confused look on her face. She had never sat down to eat dinner with a family.”

During the adoption process the Kuenzis were required to take classes focusing on what to expect and how to discipline the girls. More than 80 hours of training later, the couple found themselves still ill-prepared to handle some of the bumps in the road.

After living with her new family for six months, Shanna ran away. “We didn’t know what to do, who to call, or how to handle it,” says Kuenzi, who had not encountered similar behavior with her other children. She ranks the experience as one of the worst of her life. “She intentionally did it on Mother’s Day, during my first-year finals,” Kuenzi says. “That just made it worse.”

Shanna grew more defiant. “As the summer progressed, she ran away again and again,” Kuenzi says. Now she thinks Shanna just wasn’t ready to accept everything that came with being a part of a family: the chores, the rules, and the decision making. The Kuenzis are what the girls call “underdramatic” in their parenting style, presenting the children with a spectrum of options from which they can choose. The couple sets clear house rules, but they also consider it crucial that the girls learn how to make good decisions on their own. “They are used to very solid black-and-white rules,” says Kuenzi, “but we want them to choose the right way while understanding all sides.”

At the end of that difficult summer, Shanna started an intensive academic and therapeutic program. “She is making good progress in dealing with her emotional reactions and creating a vision of what she wants her life to be like,” reports Kuenzi.

The couple have made a commitment to provide each of the girls with a safe home and “as much opportunity as they wanted to take advantage of.” Kuenzi says she thinks her daughters have grown immensely in every respect. “They have even grown physically, now that they’re getting the correct nutrition.”

Before the adoptions, before law school, Kuenzi worked full time as a consumer market executive for Bank of America. She was responsible for managing multiple bank branches in Oregon, and the job’s long hours took their toll. “It was a very money-driven position,” she says. “I would leave on a Monday and not return home until Thursday. I was left with little time to spend with my family.” The more she lived in the corporate world, the more she realized it was not the place for her. “We had a new boss and we were playing one of those ice-breaker games. The question posed was ‘What would you be doing if you weren’t here right now?’” Unlike some of her colleagues, Kuenzi knew her answer immediately: law school.

It wasn’t until dealing with a situation close to home that she found her focus. The attorney working on her grandfather’s will made things so complicated and confusing for the family that she decided to study family law. “Sometimes lawyers have a tendency to talk like lawyers,” Kuenzi says. She hopes to bring a simpler approach to the practice.

With years of customer service experience, Kuenzi is not shy when it comes to dealing with people. “Every person’s life is touched by family law,” she says as she rattles off the list of common experiences—wills, bankruptcy, marriage, divorce—that have turned into law courses.

She decided to act on her dream after her mother’s passing left the family in a financial position for her to make the leap from work to law school. She and her husband began the adoption proceedings just as Kuenzi was preparing to start classes, thinking she would have spare time now that she had stepped away from her banking career. “I didn’t know how hard it would be,” she says. Her experience has left her more determined to succeed and pursue the field of family law. “When I look at these girls and others like them in the system,” she says, “I don’t think we do enough to protect the kids.”

You will get where you want to go in life if you are sure about what you want.Sandy Kuenzi

For Kuenzi, succeeding in law school and succeeding at raising three disadvantaged children have much in common. The first year they were tested, none of Kuenzi’s daughters passed the Oregon state educational exams in math or reading for their grade levels. She came up with a plan to change that while also drawing them closer together. The family all sat around a book-strewn dining room table and studied: Kuenzi for her first-year law classes, the girls for their tutoring sessions at Sylvan Learning Center, and Mike for his pilot’s license. To keep everyone motivated, Kuenzi and Mike promised that if the girls raised their grades sufficiently, the family would take a vacation. Now Stephanie is getting straight A’s, and the family is on its way to Hawai‘i to celebrate. “Stephanie told us it was the first time she felt like she could succeed and actually be smart,” Kuenzi says.

Driving the girls to and from music lessons, youth group meetings, church, and visits with friends, Kuenzi finds she has little time for activities of her own. “I’ve had to miss classes to go to school concerts,” she says. But her dedication to her family and focus on her goals is clear.

“All of us do whatever we have to do to make it work,” she says. “You will get where you want to go in life if you are sure about what you want.”

As for where Kuenzi is going, she looks down at a homemade card. It’s a brown piece of construction paper with big crayon lettering across the front: “To the best MOM in the world!!!” “Mom” is underlined and in uppercase letters, just in case she needs a reminder of her place in this family. It’s exactly where she wants to be.