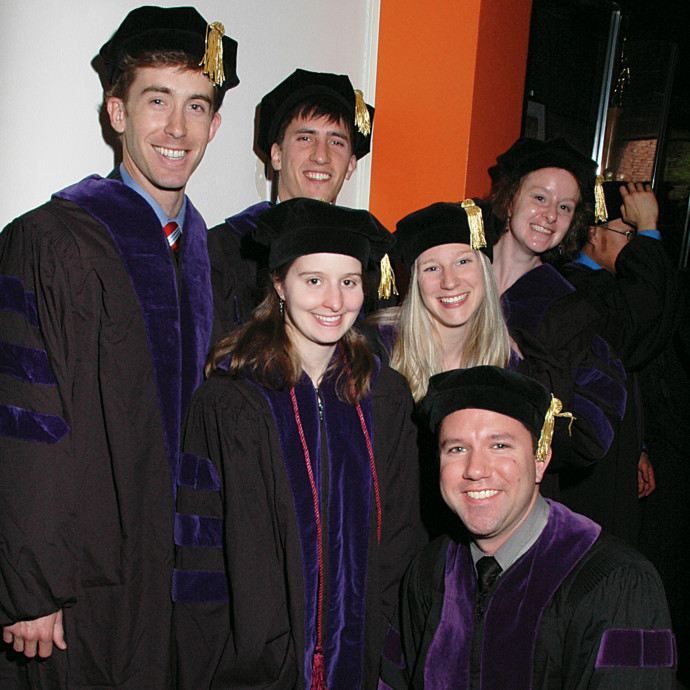 2 Student had not completed requirements for graduation by commencement date.

Twenty-eight graduates were inducted into the Cornelius Honor Society on May 27 during a special reception held at Frank Manor House. Members are selected by the faculty based on distinguished scholarship, leadership, and contribution to the Law School community. The society is named in honor of Dorothy L. Cornelius, who served the Law School for 20 years.

“This is my sixth Levenson,” says Newell. “I was very pleased to receive it. The class was one of my all-time favorites—smart, funny, and fun to teach. I love my job and the award was a really nice added benefit.”

Leo Levenson (1903-81) was a distinguished attorney and member of the Oregon State Bar for 56 years. He was also a highly respected instructor at the Law School for many years. The award in his name is presented annually to a faculty member selected by the graduating class.

A Discussion With Stephen L. Carter

One member of the Lewis & Clark community who was especially interested in Carter’s visit and remarks was Tom Krattenmaker, associate vice president for public affairs and communications. In addition to his work at Lewis & Clark, Krattenmaker is a writer and columnist specializing in religion in public life and a regular op-ed contributor to USA Today, serving on the newspaper’s board of contributors. Krattenmaker interviewed Carter following his visit to Lewis & Clark. 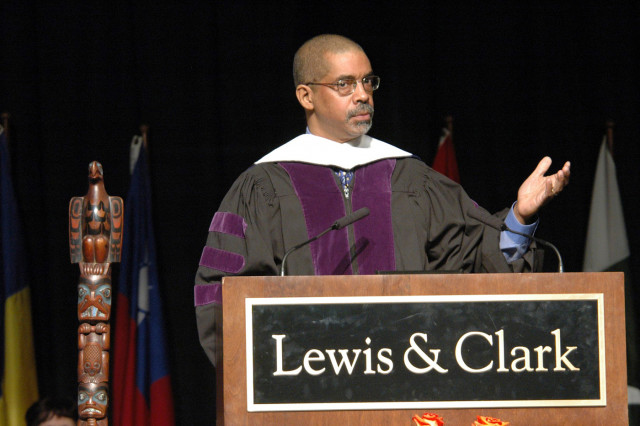 Tom Krattenmaker: Professor Carter, given the role your work has played in my own writing life, it’s a real pleasure to speak with you. Your book God’s Name in Vain played a big part in my process of becoming a religion writer and a commentator on the role of religion in our politics and public life. It motivated me and crystallized things for me like no other book

I can think of. Thank you for coming to Lewis & Clark.

Stephen L. Carter: It was really my pleasure. I have known Dean Klonoff since we were students together at Yale Law School, and I was happy to accept when he asked me to come to commencement.

Krattenmaker: Listening to your address, I was particularly struck by the points you made about the way we engage with the people with whom we disagree. You expressed worry that your generation has perhaps not done enough to model the idea that politics at its heart should not be about winning, but about the process of democracy. Why do you feel it is important and necessary that we recommit to that ideal?

Carter: The point of democracy presupposes that people can be trusted with self-government. If they cannot, then we should not have democracy, and we should not have rights and freedoms either. But if we think people can be trusted, then we ought to treat them that way, and we ought to make serious arguments to try to persuade each other—and also listen to each other. If we behave in a way that suggests that the other side never really has a serious point to make, that the other side is composed of knaves or fools, then we are not serious about democracy.

If we are going to have a serious democracy, we cannot think that it’s only about winning. I tell my students that winning is not a virtue except in war. In the rest of life process is the great virtue, I believe, and so are fairness, equality, and justice, which have to do with process. When we treat politics as though all that matters is winning, we are treating it like war, which means we are treating those with whom we disagree as the enemy.

Krattenmaker: In your commencement address, you cited a special responsibility that lawyers have in this matter. Would you please elaborate?

Carter: I often say that we train law students to listen with their mouths.… The way law school is structured, a lot of what we are training students to do is simply to pay attention to the opponent’s arguments in order to find the flaws and pick the arguments apart. That is an important skill; advocacy has its place, particularly in the courtroom or in the negotiation. But in politics, mere advocacy is not enough.

Krattenmaker: Why do you feel this commitment to democracy, to a healthy democratic process, has taken a back seat to winning in our politics? Sometimes I wonder if the more vivid presence of religion in our politics might play a part in this—whether religious arguments have sort of upped the cosmic ante, have turned many issues into matters of good and evil. Does the strong presence of religion discredit the notion of compromise that is such a necessary part of politics?

I think it is disrespect for those who disagree with us that causes us to believe the stakes are so high. That’s one of the reasons why in every election advocates for both sides are always saying it’s the most important election in years, a history-making election!

Krattenmaker: Politicians say this to mobilize people and get them to vote a certain way.

Carter: As far as I can tell, these claims have almost always been nonsense. You can make the argument that 1860 was a history-making election, maybe 1864. Other than that, they are just elections.

Elections have taken on this exaggerated importance precisely because we have trained ourselves to believe that people on the other side are evil, that our side has to win the election because otherwise the evil people will take over. Well, I just do not believe that, and I don’t think you can run a democracy that way. What you have then is not a democracy, but a deeply reactionary society that happens to hold elections.

Krattenmaker: That’s a powerful statement. It rings true for me, though, when I think about an online dialog I’m having with an old high school friend who happens to hold much different political views than I do. In her view, compromise is dishonorable. To her thinking, the other side—my side, as it turns out—is bent on destroying the country.

Carter: There is great truth at the heart of liberalism and great truth at the heart of conservatism.… There are a lot of different political points of view that have deep and abiding truths from which all of us can learn. But when we treat elections as these Manichean contests, when we act as though we must win lest there be evil afoot in the world, then we lose sight of the possibility of learning from values that compete with our own.

Krattenmaker: The other thing I notice again and again in the political rhetoric is this notion that if we elect a certain set of candidates, we are going to fundamentally change America. I guess I can see the tactical reasons for this. You get people motivated to vote, and to vote a particular way.

Carter: The late Daniel Moynihan made a really good point when he said that culture is more important than government. I think that remains true. Certainly, politics can nudge culture in one direction or another. But elections do not change America, by and large.

Krattenmaker: In God’s Name in Vain you write about a fascinating figure named Fannie Lou Hamer, an African American woman who intersected in a revealing way with the Democratic National Convention in 1964. Those passages still stick in my memory—how little concerned she was for status and power, how unwilling she was to participate in the wheeling and dealing that go on in politics. This devoutly Christian woman stood firm on the principle of racial justice, which to her was a deeply religious principle. She seems to exemplify the idea of prophetic religious expression in the political arena. Can you think of more recent examples of this?

Carter: Not since the civil rights movement, and I will tell you why. It has to do with the way politics have changed. If you look at Fannie Lou Hammer’s ministry, what is striking about it is the willingness to lose. It was about bringing what she saw as the voice for Christ into the debate, and if she won, she won, and if she lost, she lost. She wanted nothing for herself. She was totally prepared to go back and be the former sharecropper she has been before. That is precisely what made her ministry prophetic, the willingness to be defeated.

Nowadays, it is my experience that people of faith who get heavily involved in politics, whether on the left, right, or in between, really become parts of political machines.

In the end, it becomes part of helping someone win. That is where C.S. Lewis’ caution from 60 years ago becomes so important, when he warned Christians that if they edit their ministry to fit the needs of the election, then their ministry ceases to be Christian…. Your faith becomes impure and compromised because of what you have to do in order to win and, indeed, you become concerned mostly about victory.

I am skeptical that politics can ever really call us to our better selves. People tend to look to political leaders to make us noble and I just don’t think that is realistic…. Let me give you an example of what I mean. Consider attack ads. All of us say we hate them and wish they would stop, but the only way they will ever stop is if voters decide to vote against candidates who run attack ads.

Krattenmaker: If we don’t want this behavior, we might need to vote against people who engage in these tactics—someone we would otherwise support. Is that what you’re suggesting?

Carter: If we will not make that sacrifice, then I think we are silly expecting nobility from politics. We ourselves are encouraging ignobility.

Krattenmaker: Was there a time in our politics when we had our sights set not principally on winning, but on a healthy democratic process?

Carter: I don’t know. Certainly, I am not claiming there was once a golden age. I am claiming that the current age is very dangerous for democracy, and if we go too far down this road I am not sure we will be able to turn away.