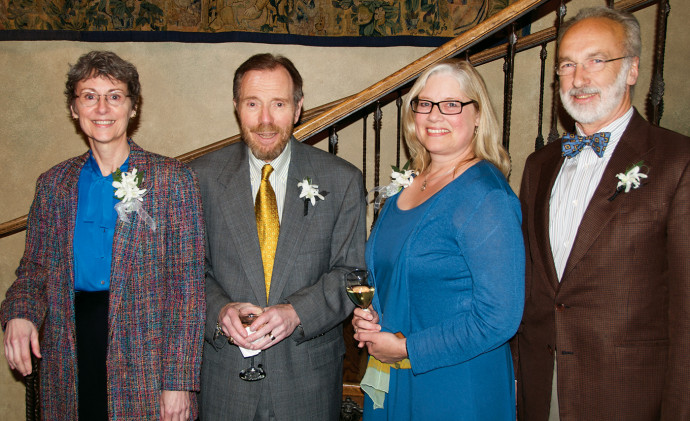 During a special reception held as part of the Law School's commencement alumni, faculty, and staff had an opportunity to pay special tribute to the retirees. Left to right: Beth Enos, Peter Nycum, Janet Neuman, and Jim Huffman.

“The Law School has been my professional home for almost 20 years. The very first day I taught, I drove home thinking, ‘I can’t believe someone is paying me to have this much fun!’ I never quit thinking that,” says Beth Enos. Enos, along with Jim Huffman, Janet Neuman, and Peter Nycum, retired from the Law School faculty at the end of May. Huffman was with the Law School for 38 years; Nycum, for 33 years; and Neuman, for 19 years. Each leaves with very fond memories of the students they instructed, the alumni relationships they built and maintained, and the staff and faculty colleagues they worked with over the years.

“I especially appreciated the school’s willingness to take a chance on my idea to develop a contract drafting seminar, a course not taught in many places at the time,” says Beth Enos, who joined the Law School in 1991 and also taught legal writing. Lewis & Clark has “the best students anywhere. They are smart and funny and committed to service. I am proud to have them join me in a profession I feel blessed to have been a part of.” She maintains that she learned as much from them as they did from her.

Enos also toasted her colleagues, especially those in the Legal Writing and Analysis (LAW) department. “We have all grown together professionally as we raised our families and supported each other in countless professional and personal ways. The gang of four—Steve [Johansen ’87], Daryl [Wilson ’80], Toni [Berres-Paul ’86], and I—have been together since 1992.”

“I can’t in my wildest dreams imagine a better way to have spent the last two decades of my professional life.”

Enos received her BA in 1978 from Memphis State University and her JD in 1981 from Memphis State University School of Law. After clerking for the Honorable J. Smith Henley of the U.S.Court of Appeals, she went on to work in-house for Federal Express in Memphis. From there, she moved to Bangkok, where she worked with clients from the United States, Europe, Asia, and Australia for Baker & McKenzie and started the BangkokWomen’s Forum. Enos became a guest lecturer at the law school in Abidjan, Ivory Coast, West Africa, where she taught from 1987 to 1989. While in Africa, she founded and chaired the Professional Women’s Network of Abidjan.

Jim Huffman, Erskine Wood Sr. Professor of Law, spent more than 38 years at the Law School in a multitude of roles, including associate dean of the faculty and dean, a job he held for 14 years. But Huffman says that teaching burgeoning attorneys was always his priority.

Born in Fort Benton, Montana, Huffman graduated from Montana State University with BS and the Fletcher School of Law and Diplomacy at Tufts University with an M.A. He received his JD from the University of Chicago Law School. During his tenure at Lewis & Clark, Huffman also served as a visiting professor at Auckland University in New Zealand, the University of Oregon, the University of Athens in Greece, and Universidad Francisco Marroquin in Guatemala. He was also a fellow at the Humane Studies Institute and a Distinguished Bradley Scholar at the Heritage Foundation. Huffman served on numerous boards, including those of the National Crime Victims Law Institute, the Foundation for Research on Economics and the Environment, the Classroom Law Project, and the Rocky Mountain Mineral Law Foundation.

I can’t in my wildest dreams imagine a better way to have spent the last two decades of my professional life.Beth Enos

Over the years, Huffman taught courses in a number of areas, including constitutional law, natural resources, jurisprudence, constitutional history, and water law. Recently, Huffman had also returned to teaching first-year students, instructing them on the intricacies of tort law.

An avid writer, Huffman has authored more than 100 published articles and book chapters on a wide range of subjects. One of those subjects gave him a special claim to fame: he became the national expert on chicken law. In retirement, Huffman plans to continue writing and working with various institutions in Oregon and around the country.

“I came to Lewis & Clark almost by accident,” says Huffman. “Never having contemplated being a practicing lawyer, teaching seemed like a good option.” When Huffman threw his hat in the ring through the annual AALS hiring process, the late Professor Ed Belsheim invited him to Portland to interview at the Law School. He received an offer from Lewis & Clark—and two other law schools. Always the outdoorsman, Huffman chose Lewis & Clark in part because of its proximity to Mount Rainier and Mount St. Helen. “Thus, I became a sort of accidental professor, and 38 years later I am packing my books (which are numerous) and looking for new adventures. …with three school-age children, more rivers to run and mountains to climb, bugs to collect, a wonderful place in Montana, and many more liberal feathers to ruffle, I will not be at loose ends.”

Since 1992, Janet Neuman has been the water law guru. She also taught administrative law and civil procedure for many years, mining law and public lands law when she could, and property in her last couple of years at the Law School.

Neuman serves on the board of the Freshwater Trust, a nonprofit conservation group created by the merger of the Oregon Water Trust and Oregon Trout. OWT was a nonprofit entity restoring instream flows through acquisition of water rights, and Neuman had been its president from 1993, when it opened its doors, until not long before the merger. She is a former member of the State Board of Forestry, appointed by the governor of Oregon. Neuman also served on the Western

Water Policy Review Advisory Commission by appointment of President Clinton; the commission released a comprehensive report in 1998 about the recommended future role of the federal government in western water management.

Prior to retiring, Neuman codirected the Law School’s Natural Resources Law Institute. She also served as the Law School’s associate dean of faculty from 2005 to 2008, supporting the faculty’s efforts in teaching, scholarship, and community service. Neuman says she treasures her time at the Law School and hopes she’ll “always be a part of the Law School community.”

In her retirement, Neuman plans to be anything but inactive. She will continue serving on volunteer boards, writing on natural resources issues, and designing jewelry. For years, Neuman has donated her unique beaded pieces to the student-run Public Interest Law Project (PILP) for their annual auction. She also held sales of her creations to help fund the Oregon Water Trust; now she does the same for the Freshwater Trust. She will also serve as senior counsel to the Tonkon Torp firm in Portland, where she helped start a water law practice during her sabbatical a few years ago. “I will miss the students and the classroom tremendously—especially teaching first-year students,” says Neuman. “The most rewarding part of teaching has been to watch students grow from their first days in the classroom into fantastic lawyers doing great work. I’ve seen many of our alums in action through my ‘extracurricular’ activities, and they always make me incredibly proud.”

The most rewarding part of teaching has been to watch students grow from their first days in the classroom into fantastic lawyers doing great work.Janet Neuman

Peter Nycum, who served as the associate dean of the Boley Law Library and professor of law, notes that his 33-year tenure included five Lewis & Clark presidents and six Law School deans (if you count one serving twice), a few faculty comings and goings (“but not nearly what might be expected”), and a library that saw incredible change over a relatively short period of time.During Nycum’s tenure, the book collection grew from 100,000 to 550,000 volumes. And, then, of course, there is technology. “Thirty-three years ago technology meant a new IBM Selectric typewriter. There were no computers. But, within two years, we had two computers—one from West and one from Lexis. In fact, the library was only one of five law schools to have both systems.” Now, says Nycum, computers “are what pencil boxes used to be.” He also saw significant structural changes to the Boley Library, including the addition of Wood Hall in 2002, which includes the Rare Books Room, named in his honor.

Nycum earned his BA in 1963, as well as his LL.B. in 1967 and his M.L.S. in 1968, all from the University of Pittsburgh. He began his library career as a research associate at the same institution’s Health Law Center, and then became assistant director of the Allegheny County Law Library. Just prior to joining the Lewis & Clark Law School faculty, Nycum was director of the San Mateo County Law Libraries.

When he announced his retirement, Nycum noted that he had been having flashbacks to the farewell speech that the great New York Yankee baseball player Lou Gehrig gave before a packed Yankee Stadium on July 4,1939. “My version is, ‘I consider myself the luckiest person on the face of this earth. I have been in the Library for thirty-three years and have never received anything but kindness, encouragement, and support from the students, staff, faculty, and deans.’” Nycum also noted how much the library staff has meant to him. “To call them staff is a misnomer. They are my family, and I will greatly miss being around them on a daily basis. It is gratifying, however, knowing the library is in great hands.”

“A part of me will always remain here—although not as Jim Huffman has suggested from time to time, stuffed and stood in a corner of the Rare Book Room.”

Over time, new faculty will be recruited and hired to teach the classes formerly taught by Enos, Huffman, Neuman, and Nycum. In the interim, the Law School is pleased to welcome several visiting faculty members: