Some of India’s most charismatic species now face extinction. People in India desperate to make a living turn to exploiting captive animals for profit. What is being done to remedy these complex problems?

On Monday, September 17th, at 12:15pm in Room 1, a lecture explores the issues of endangered wildlife in India.  India harbors a stunning array of biodiversity, including some of the last populations of tigers and Asian elephants. Unfortunately, problems typical of developing countries threaten the future of many species, as well as consign many individual animals to difficult or even cruel existences in captivity. Poaching and habitat destruction makes extinction of many species a serious possibility in the near future. Additionally, individual animals are kept in poor conditions and exploited for economic gain by people who themselves are struggling to make a living. 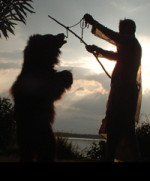 Geeta and Kartick will discuss their work to protect both wild and captive animals in India, while assisting people who exploit animals transition to more sustainable ways of making a living.

Event Co-Sponsors
This exciting event is the result of joint efforts among the following Lewis & Clark entities:

This event is open to the public. Lunch provided.