Erin Ryan has joined the Lewis & Clark community as an associate professor. She is spending her first year with the Law School abroad at Ocean University in Qingdao, China, on a Fulbright grant. 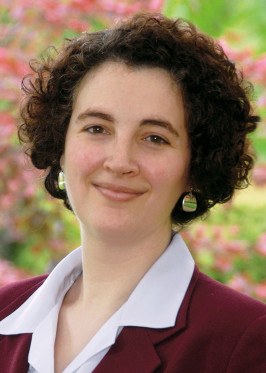 As a Fulbright Scholar, Ryan will not only teach U.S. environmental and property law, but also lecture around the country and conduct research how interjurisdictional governance is negotiated between Chinese local, provincial, and central governments. “China is key to the future of environmental law worldwide, which is one reason I’m interested in learning as much as I can about Chinese environmental governance,” she says. For Ryan, who studied Chinese language and politics as part of her undergraduate degree at Harvard-Radcliffe, the trip will also be her first opportunity to visit the country. “I graduated right after the mainland was closed to foreigners following the Tiananmen incident,” she says. “I’ve been interested in China for some 25 years, and still speak enough Mandarin to get around, but I’ve never had the chance to actually be there.” As part of its global mission Lewis & Clark has worked to increase ties between the Law School and international schools like Ocean University, which is also renowned for its environmental and natural resource programs. “Lewis & Clark is already building bridges there,” Ryan says, “and I’m really looking forward to helping fortify them.”

Ryan comes to Lewis & Clark from the Marshall-Wythe School of Law at the College of William & Mary in Williamsburg, Virginia, where she taught property, natural resource law, and negotiation. “I will miss my wonderful students [at William & Mary],” she says, “but I think the students at Lewis & Clark will quickly make up for that loss.” Ryan says the great students are one of the many reasons she is excited to join the Law School faculty. “I love that Lewis & Clark students go out and really make a difference in the world.” The environmental law program, one of the best in the country, is what initially attracted Ryan to Lewis & Clark, she says, but the welcoming nature of the faculty, staff, and other community members also made a favorable impression. Ryan, who used to perform as a professional musician, says that the chair found and played some of Ryan’s music for the selection committee during her faculty interview. “Lewis & Clark really cares about you as a whole person. At a lot of schools you are your specialty and that’s it.”

Ryan has more than 15 years of experience working in land use, environmental, and natural resources law. Her passion for the law began when she worked as a forest ranger at the Mono Basin National Forest Scenic Area, just east of Yosemite National Park. “I realized that I would never be able to participate in deciding the policy that I had to implement. I would not be able to translate my ground-level experience into policy making, and the more I learned in the field, the more I wanted to be able to do exactly that.” Part of her job was to interpret Mono Basin water issues for the public, which revolved around the intersection of the common law public trust doctrine and western water law. Ryan thought there was more she could do to contribute to land use and other conservation issues, and “the toolbox that was most useful was a legal degree.”

Ryan received her JD from Harvard Law School and was a Hewlett Negotiation Research Fellow at the Harvard Program on Negotiation. She went on to clerk for James R. Browning of the U.S. Court of Appeals for the Ninth Circuit and worked as an associate at public-interest law firm Shute, Mihaly & Weinberger in San Francisco, which specializes in land use, environmental, and local government law. There she became even more interested in the constitutional dimensions of interjurisdictional environmental governance. “I intended to practice for much longer,” Ryan says, but she was invited to teach negotiation at the University of California’s Hastings College of the Law. Ryan initially taught negotiation part time but fell in love with teaching.

What I’ve been working on since becoming a law professor—and what I hope to continue to be able to do at Lewis & Clark—is to help solve pressing problems, especially environmental problems, using the best tools that I have.Erin Ryan

“I love being part of the academic program,” she says. While teaching at Lewis & Clark Ryan hopes “to help prepare a new generation of lawyers to take on the issues of the day,” she says. “What I’ve been working on since becoming a law professor—and what I hope to continue to be able to do at Lewis & Clark—is to help solve pressing problems, especially environmental problems, using the best tools that I have. I do this in my scholarship by proposing new ways of looking at old problems in environmental and interjurisdictional governance, and in seeking to bridge understanding in conflicted legal and policy contexts. I do this in my teaching by helping prepare new generations of lawyers to tackle these problems through legislation, litigation, and wherever possible, negotiation. And I try, as best I can, to live my values, and raise children who will do the same.”

Ryan has published numerous works on environmental law, constitutional law, and negotiation. Her book Federalism and the Tug of War Within will be published by Oxford University Press later this year.

Ryan is also thrilled to be moving back to the West Coast and to Portland in particular—the first western city she visited after growing up in New York. She spent lots of time hiking, camping, and otherwise exploring the state while a forest ranger. “I love everything about Oregon! It is one of the most beautiful states in the union.”

When Ryan returns from China in the fall of 2012, she will teach property, natural resource law, negotiation, and water law.