Editor’s Note: Wilson, aka Runner #23902, practices family law in San Francisco and serves on the law school’s Board of Visitors. He has run more than 100 marathons. We thank PortlandMarathon.org for permission to reprint this article.

Something obviously was wrong. Grim-faced BAA. course officials were blocking Commonwealth Avenue at the 35K mark. Barricades were completely blocking the roadway. “The race is over,” we were told. “Go home.”

Easier said than done, each stranded runner thought silently. “Home,” for any marathoner healthy and fit enough to finish before the course closes, is the finish line—nothing else.

“Where can we go?” someone asked.

“Go anywhere you want,” an official replied, “but don’t take one step closer to Boston.”

Thus, in an instant, the 2013 Boston Marathon ended for more than 5,000 runners. Some were mere feet from the finish line and facing grave dangers in the zone of peril. Others—including me—were miles away and comparatively safe.

Something was stolen from all who didn’t finish that day. We never reached home.

Who am I? I’m just an ordinary runner—you know, one of the nameless and uncountable thousands of runners who never stand on the victor’s podium. I blend right in with that river of people who finish hours behind the winners. I’m #23902. 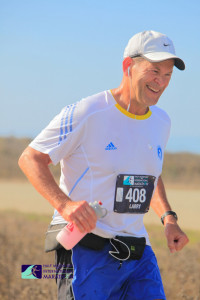 More than a full year has passed. The 2014 Boston Marathon is tomorrow and the nearly 5,000 of us who didn’t finish last year have, amazingly, been invited to return. We’ve been given another chance by BAA to get home. BAA. will “leave no runner behind.” My gratitude for that decision is infinite.

It’s been a very long journey back to Hopkinton. My 2013 Boston bib number has been pinned to the back of my racing jersey for 12 different marathons since last April. It has successfully crossed all 12 finish lines. Bart Yasso took a picture of #23902 in September at the Half Moon Bay Marathon, where he was the official host. He tweeted that picture to more than 40,000 followers. Jeff and Barbara Galloway literally bumped into #23902 just last month in Rome. Runners everywhere, on seeing #23902, have been moved to words, tears, anger, and every other emotion in the book. It’s just a bib—a tiny piece of paper—but it was actually on the Boston course last year when the calamitous events occurred. People touch this piece of paper. They are moved. Many cry.

What is going to happen tomorrow? I don’t know. But here’s what I’ve learned about our sport in this long and seemingly endless year.

There’s no knowing what will happen in any race, much less in Boston—but this is Boston—and it’s a very different Boston from the place where so many of were halted and stranded last year. Tomorrow, my 2014 Boston bib number will be pinned to the front of my shirt, but #23902 will be pinned to its familiar place on my back.

Will #23902 finally cross the finish line on Boylston Street? Don’t ask. Before tomorrow afternoon there’s no knowing outcomes. This is marathoning. Anything can happen. Suffice it to say that the plan is to do everything possible tomorrow to finally finish the long journey home.

I’ll be joining 36,000 other athletes—each with compelling and unique stories, most of which will never be chronicled—and together we will be competing in a race that will be both a memorial for the dead and injured as well as a celebration of the forces of good and decency that are reclaiming primacy in our sport. When terrorists attacked the Boston Marathon in 2013, they chose the wrong sport, the wrong town, and the wrong race. Runners connected deeply with one another worldwide after these events. We were bloodied, our innocence and naïveté were crushed, and security was suddenly paramount. In short, this sport grew up overnight.

In this new world, while security has suddenly become every race director’s overriding concern, innocence and plain old-fashioned fun have not and never will disappear from running. It’s sad that security cannot be taken for granted, but the full spectrum of joys for participants and spectators alike will never go away.

Why? This is our sport. Boston is our town. This race is our race. You cannot take these things from us—they are ours. Nor can you define the running community. We choose to define ourselves.

Who are we? We are every race number in the deck. We are runners and we are winners—all of us, fast and slow alike. Events may delay us, but life and health permitting, we finish the things we begin. This is what we do. This is who we are.

Tomorrow we run for the victims of the senseless events of last year, but we also run to reclaim this sport, this city, and this race for runners everywhere. Fellow runners—run well.

The finish line on Boylston Street has finally come into view. There it is. The Forum Restaurant is coming up on my left. I’m compelled to stop and say a prayer for the bombing victims where bomb #2 exploded. Similarly, there’s another mandatory stop and another prayer right in front of Marathon Sports, where the first bomb went off. It’s far more important to stop and pay my respects to those three souls whose life journeys ended right here one year ago, and to pay my respects to the hundreds who were so gravely injured, than it is to sprint towards the finish line.

I’ve been trying to cross the 2013 Boston Marathon finish line for one year, six days, and several hours now. I can spare the time. And I will. It’s just part of closing out every thread of this previously unfinished business.

Okay. Now, to the finish line.

Not all of the 5,000+ runners could be here today, so many were unable to complete their own journeys. Many will finish their own unfinished business in other ways or in years to come right here in Boston. I envision all will be successful in time. But right now, for the rest of us, our long trip home is done.