Paying It Forward With Scholarships

By Sandy Lucas, Associate Director of Corporate and Foundation Relations

Thanks to the generosity of our alumni and friends, scholarships help Lewis & Clark students realize their dreams of obtaining a legal education, even in today’s uncertain economy.

According to the American Bar Association, the average education debt for law graduates at private schools is nearly $125,000. We are proud of our efforts to reduce this financial burden by awarding scholarship aid to a significant percentage of incoming and continuing Lewis & Clark students. These scholarships often make all the difference when it comes to being able to afford school. They are also critical to Lewis & Clark’s ability to attract the best students to our programs.

John Bates and his wife, Susan, have been an integral part of Lewis & Clark College for over 30 years. John, formerly a professor of finance and investments in the College of Arts and Sciences, also served as chair of the Lewis & Clark Board of Trustees. Today, he is a lifetime trustee of Lewis & Clark and a member of the law school’s Board of Visitors. John and Susan established the Bates Family Endowed Scholarship for Business Law to encourage and support law students who are planning to pursue a career in business law. This scholarship provides $10,000 to a first-year law student annually.

In addition to the financial aid they provide, scholarships also perpetuate a legacy of giving. The positive impact these awards have on their student recipients creates a ripple effect that continues to touch subsequent generations.

Just ask Jerry Carleton ’07 and his wife, Heather. Jerry came to Lewis & Clark Law School to better himself for the business he was launching at the time. “I was a young entrepreneur who was going to law school at night and running my company by day,” said Jerry. “I wasn’t paying myself much, if anything at all, and I came to a crucial point where I decided I needed to quit school and put my money into the business.”

Heather recalls that their grocery budget at the time was $10 a week. When she and Jerry realized they could no longer afford to send Jerry to law school, they were devastated. But as he was preparing to communicate this difficult decision to the school, Jerry received a letter notifying him that he was a 2006 recipient of the Paul H. Casey Scholarship for Business Law. “I stared at the letter, an actual tangible blessing in my hands. I called my wife to tell her the news and she started crying. I could continue my legal education. I could continue to run the business and apply the education that I was acquiring at night to everyday decisions I was making during the day at the company.”

Not long after, Jerry was invited to a business law luncheon as a representative of the Casey Society of Fellows. At the event he met his present-day mentor, John Bates, a longtime supporter of the law school. The two men instantly connected, and remain close. In fact, Jerry considers Bates to be on his “life board of directors.” “I reach out to John for advice about everything,” he said.

Today, Jerry is the principal at Immix Law Group, which he founded. As a corporate and securities attorney, he counsels private emerging and growth-stage companies on corporate, finance, and securities issues.

He and Heather describe “feeling a holistic sense of support from the law school,” and they are committed to paying that support forward to future generations. “The Casey Scholarship was a huge milestone for us,” said Jerry, who calls its impact life changing. Inspired by their gratitude, he and Heather started the Carleton Family Business Law Scholarship in 2011. “We started it as a smaller scholarship and have been blessed to be able to bump it up annually. We look back at what Paul did for us, and at what John and Susan give, and decided we really wanted to be able to match that $10,000-per-year level.”

In 2014, to coincide with the law school’s centennial, the Carletons established the Immix Business Law Scholarship, an annual scholarship of $10,000. Recipients will be first-year law students who have demonstrated business experience and a strong work ethic. In addition to the financial support, the scholarship will offer opportunities for mentorship.

The couple is also proud that Immix Law Group has hired Lewis & Clark graduates from every class since 2011. In fact, the most recent of these hires, Ashley Demland ’15, was also a recipient of the Paul H. Casey Scholarship in Business Law.

As Lewis & Clark Law School celebrates 100 years, we also celebrate the individuals—such as Paul Casey, John and Susan Bates, and Jerry and Heather Carleton—who make up our collective community. One of the law school’s biggest assets, according to students, alumni, faculty, and staff alike, is its caring, collegial environment. As the Carletons demonstrate, the connections made here don’t end with graduation.

For his part, Paul Casey is extremely pleased not only by Jerry’s success, but also by the Carletons’ gifts in turn. Perhaps in the not-too-distant future, an Immix Business Law Scholarship recipient, too, will be inspired to “pay it forward.”

The Casey family has been instrumental supporting the law school and setting an example of philanthropy that has served as a model for support from other significant donors. In 1985, Henry Casey and his sister Marguerite made a gift of $1.2 million to establish a professorship at the law school dedicated to business law integrity and ethics. The Henry J. Casey Professorship of Law is held by Ed Brunet.

Henry’s son Paul created the Casey Scholarships in 2004 in honor of his late father. The Paul H. Casey Scholarships benefit four students each year (two studying business law and two studying public interest law) by awarding them $10,000 apiece. The scholarships reflect Henry Casey’s vision of education, which involved not only intellectual enrichment but also attention to integrity and character, as well as a commitment to public service. Scholarship recipients are expected to embody these values and follow Henry Casey’s tradition of citizenship.

Paul is a graduate of Portland’s Grant High School, Oregon State University, and Whittier College. Since retiring from his career as a teacher, he has made his home in La Quinta, California, although he travels extensively and has a ranch in South Africa. In 2007, in recognition of his positive influence on the campus community, he was named an honorary alumnus of Lewis & Clark Law School.

Paul is always delighted to hear from recipients of his scholarships. “I received a thank-you letter from a young man who had used this gift to help turn his life around after struggling with alcohol and family problems,” he said. “I was so touched that I sent copies of the letter to members of my family.”

In April 2015, in honor of the law school’s centennial, Paul Casey donated $888,888 to Lewis & Clark to permanently endow the Paul H. Casey Scholarships for Business Law and for Public Service. This is a landmark gift for Lewis & Clark Law School, representing the largest single donation for scholarships in our history. The endowed scholarship will provide approximately $40,000 a year, in perpetuity, to be split equally among four students.

The Casey family has a long tradition of philanthropy and community support. James (Jim) E. Casey, Paul’s uncle, revolutionized package delivery when he founded United Parcel Service (UPS). He also improved the lives of millions of America’s children by starting two of the nation’s leading child welfare-oriented foundations. When Jim died in 1983, he left his fortune to the Annie E. Casey Foundation, which has since become one of the largest foundations in America. 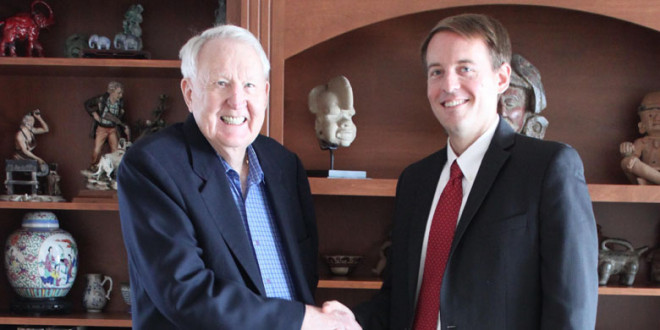