Monumental Legacies: Our Buildings and Their Namesakes

By Sandy Lucas, Associate Director of Corporate and Foundation Relations 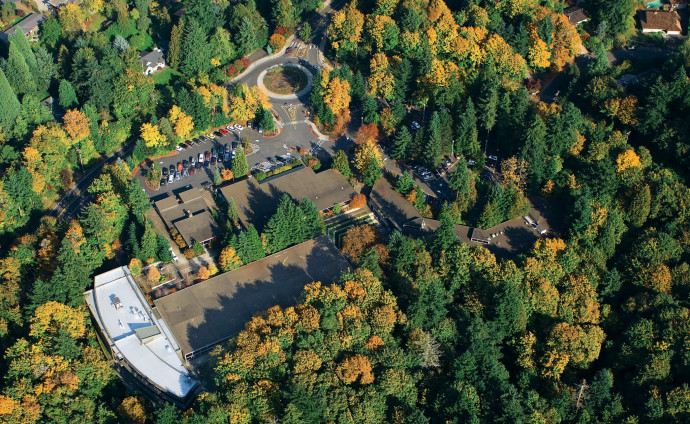 For much of its history, the law school was without a dedicated home.

Northwestern College of Law rented modest downtown office space until its 1965 merger with Lewis & Clark College. It would be another five years—during which the newly renamed law school was housed in spare rooms at Lewis & Clark’s Watzek Library—before the school would finally have a permanent place to call its own. Today’s campus is intimate and compact, with unobtrusive structures set against the backdrop of Tryon Forest. Students, recent alumni, faculty, and staff know these buildings well, but may not know about the extraordinary people for whom these familiar facilities are named.

Throughout Northwestern College of Law’s most tumultuous decades, the Gantenbein family devoted themselves to the school’s survival. Judge Calvin U. Gantenbein, a decorated Spanish-American War veteran, served as its first dean. The modern campus’s first permanent building is named for Calvin’s youngest son, Judge John Flint Gantenbein ’34. During World War II, when a number of students left for the military, the younger Gantenbein took sole proprietorship of the law school, keeping it afloat through loans and the sale of his own house. The campus’s first structure honors his dedication and the Gantenbein legacy. Originally a student lounge, the building now houses the Career and Professional Development Center and student organization offices. With a fireplace and comfortable couches, the common space remains a popular gathering space. 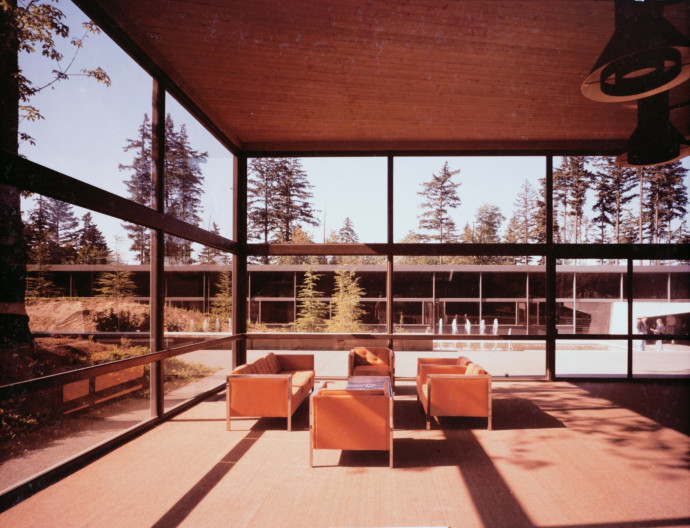 The interior of Gantenbein, as it originally appeared

Major General Chester E. McCarty ’29 was a distinguished military command pilot, attorney, and Lewis & Clark trustee. A native of Pendleton, Oregon, he served as assistant attorney general from 1930 to 1936 and was elected state senator in 1942, though he relinquished the seat when called to active duty that same year. He served as an Army Air Corps squadron commander in World War II, and later flew combat airlift missions in Korea. Between military assignments, he continued to practice as head of a Portland law firm. McCarty died in 1999 and is buried in Arlington National Cemetery. Fittingly, his namesake building—originally dubbed by students the “Normandy Bunkers” due to its concrete, windowless walls and fort-like appearance—is a commanding presence on campus. 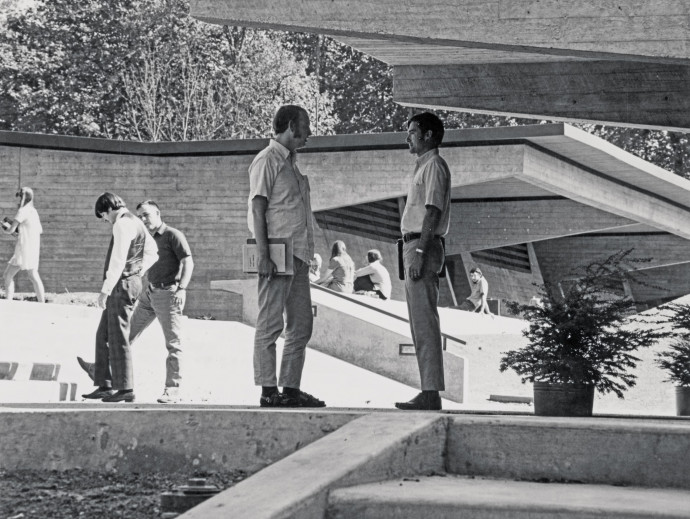 The formidable exterior of McCarty

Paul L. Boley, a Harvard-trained Portland attorney and longtime member of Lewis & Clark’s Board of Trustees, was instrumental to the success of the law school’s pursuit of national accreditation from the American Bar Association. The Boley Law Library, now the largest law library in the state, is an apt tribute to a man renowned for his legal scholarship and leadership in the Oregon State Bar. 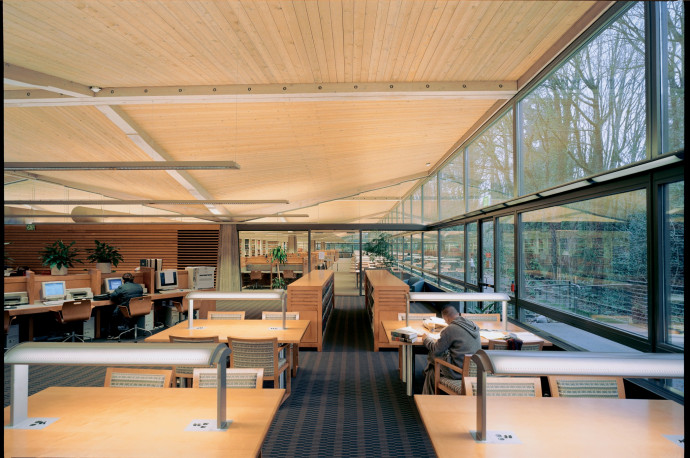 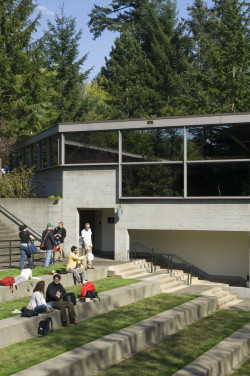 The northwest facade of Swindells, which is better known as the LRCOriginally from Baltimore, William Swindells Sr. was a Lewis & Clark trustee and a leading figure in bringing about the 1965 merger. The founder of Willamette Industries built lumber mills across Oregon—and he believed in giving back to the state that had made his fortune, establishing the Oregon Community Foundation in 1973 as a permanent endowment for community improvement efforts. As head of the first capital campaign for the law school campus, Swindells was generous with his time and wealth. He preferred to move quietly in Oregon’s public life; when asked how the law school might best show its gratitude for his assistance over the years, he politely requested that they take his name off the front of the building. The William Swindells Legal Research Center is a characteristically subdued monument to his low-profile legacy as a philanthropist and friend of education.

Erskine Wood Sr. was born in 1879 at the Washington Territory’s Vancouver Barracks. Through his father—the legendary author, attorney, and civil liberties advocate Charles Erskine Scott Wood—he developed a relationship with Chief Joseph and the Nez Perce tribe that left him with a deep respect for nature. He went on to earn degrees from Harvard and the law department of the University of Oregon, three years before the latter became Northwestern College of Law. A maritime law expert, he tried and won cases into his late 90s, and was honored by the American College of Trial Lawyers at the age of 94 as the oldest lawyer ever admitted to the organization.

The youngest of eight children, Louise was born in Minnesota in 1909. She began investing money as a child and moved to New York City at a young age to begin a career as an insurance broker—a revolutionary career move for a woman at that time. After marrying in 1951, she and Erskine settled in Vancouver, Washington, where Louise quickly built a reputation as a skilled investor and financial manager. She established several investment groups, including the Jason Club, a women’s investment club that continues to this day.

After Erskine’s death in 1983 at the age of 103, Louise established the Erskine Wood Sr. Professorship in Law at Lewis & Clark to recognize an individual committed to the established traditions of the American legal and constitutional system. She also generously supported the creation of the Louise and Erskine Wood Sr. Hall. With its green design and state-of-the-art technology, the building stands in tribute to the Woods’ love of nature and the law. 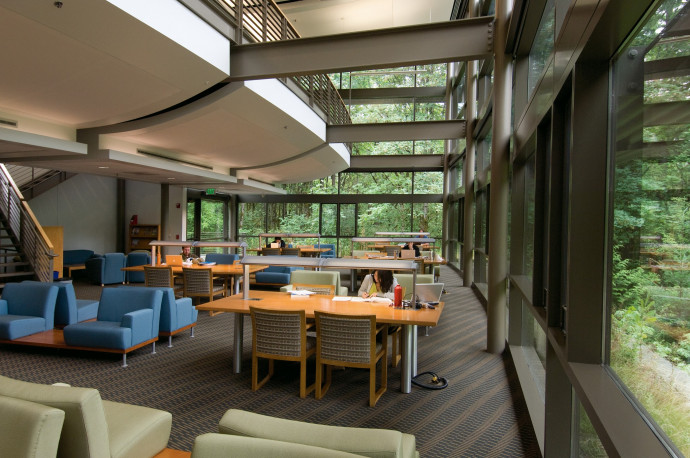