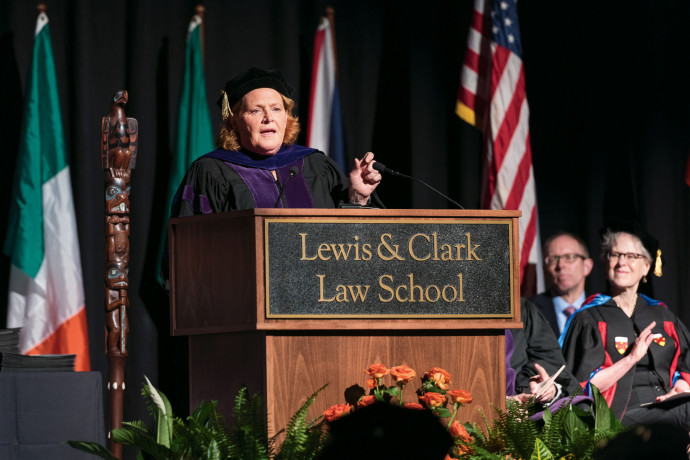 Members of the Class of 2016 were celebrated by family, friends, faculty, and staff at the law school’s commencement ceremony, which was held on Saturday, May 28.

U.S. Senator Heidi Heitkamp was the featured speaker. A 1980 graduate of the law school, Heitkamp mentioned specific professors who taught her concepts and ideas that she uses in her work in the senate. She also shared lessons that she says are basic tenants to follow throughout one’s life: “Be nice. Be empathetic. Be a believer. Be grateful.”

The senator closed her speech by encouraging graduates to “Go do great things. Go do brave things. Go do courageous things. And go make our world even better than what it is.”

Heitkamp is the second female U.S. senator from North Dakota, and the first to be elected by that state. She took the oath of office on January 3, 2013.

Formerly the director of the Dakota Gasification Company’s synthetic fuels plant, Heitkamp has a long record in the energy industry. Much of her current work focuses on promoting North Dakota’s “all-of-the above” energy plan. She sits on five Senate Committees: Agriculture, Nutrition, and Forestry; Indian Affairs; Banking, Housing, and Urban Affairs; Homeland Security and Governmental Affairs; and Small Business and Entrepreneurship.

Heitkamp was North Dakota’s attorney general from 1993 to 2001, during which time she led legal efforts that resulted in the Tobacco Master Settlement Agreement between 46 states and the tobacco industry. It was one of the largest civil settlements in U.S. history. Under the agreement, tobacco companies pay the states funds to be applied to health care costs. Heitkamp also led a successful ballot initiative in 2008 that mandated significant increases in the funding of anti-tobacco programs.

From 1989 to 1993, Heitkamp served as North Dakota’s tax commissioner. During her tenure, the state attempted to make all catalog retailers collect sales taxes. The dispute made its way to the U.S. Supreme Court in the case Quill Corp. v. North Dakota, which ruled that the U.S. Congress had the ultimate power to resolve the issue. Legislation that would enable state governments to collect sales and use taxes from remote retailers with no physical presence in their states is pending in both chambers.

Born in Minnesota, Heitkamp grew up in Mantador, North Dakota. She holds a BA from the University of North Dakota in addition to a JD from Lewis & Clark Law School.