On Saturday, May 27, 2017, more than 200 graduates received juris doctor degrees from Lewis & Clark Law School, while others received degrees in masters of laws and masters of studies in law.

The ceremony began with a welcome from Dean Jennifer Johnson, followed by words of advice and encouragement from Lewis & Clark Interim President David Ellis. 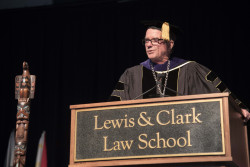 “Caring and compassion” combined with “hard earned expertise in legal thinking and analysis, together they open the way for your pursuit of justice.” The search for truth is demanding. “Our quest is not for uniformity of opinion, but for fair and equitable process.”

Ellis stressed, “Bring to bear the power of language.” He advised graduates to “find ways to control your profession or it will control you.” “Balanced life, it will make you a better person.” His further wish for graduates? “That you will always, always, stay connected to your law school…be active alumni” and “help us launch future generations of lawyers.” 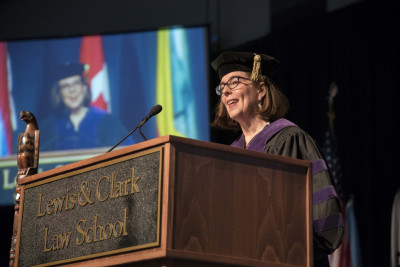 Oregon Governor Kate Brown JD ’85 was the featured commencement speaker. Brown, an alumna of the law school, spoke of her love of having been a student at Lewis & Clark Law School. “A place where, through a special mixture of adrenaline, terror, perspiration, you are transformed from a regular person into a lawyer.”

The Governor spoke of Justice Betty Roberts’ journey to the Oregon Supreme Court and how Justice Roberts inspires her to this day. And she spoke of the friends she made at Lewis & Clark. “The friendships you have made at law school are likely to be the most profound and long-standing relationships of your life.”

Gov. Brown closed her speech by stating the grads are the heroes of Oregon’s future.

“We need fighters for justice in and out of the courtroom… I hereby charge you, at the next generation of advocates, leaders, and problem-solvers, to be ethical, compassionate, and courageous and fight for the justice in all that you do.”

“It comes down to this,” Brown said, “Today’s political superheroes, the ones fighting the good fight-and often winning, are, take a guess, attorneys…The fight for justice never ends…In fact, I’d say, you are fully capable of changing the world.” “Please do.”

Torrey McConnell presented the Leo Levinson Award for Excellence in Teaching to Professor Amy Bushaw, who was selected by the graduating class.

Members of the Class of 2017 join almost 10,000 graduates – among them seven state Supreme Court Justices, Oregon’s current governor, and scores of trial judges, district attorneys, legislators, and distinguished private practitioners – who enrich the legal community throughout Oregon, the Pacific Northwest, and the nation.