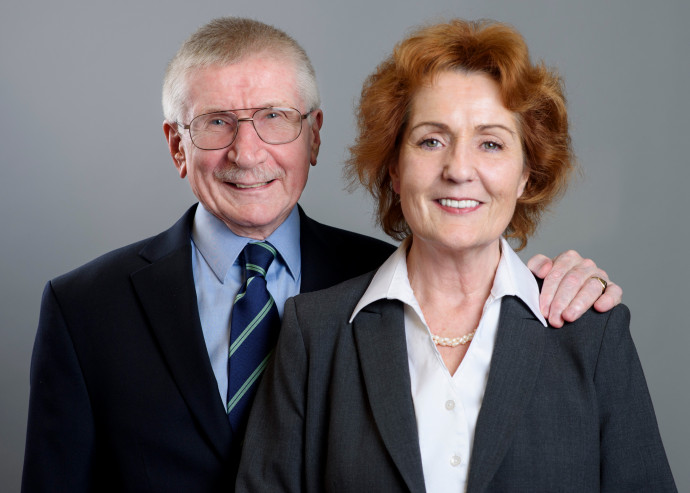 Two of our distinguished faculty members, John Grant and Elaine Sutherland, retired this year. Both were awarded emeritus status for their contributions to the legal profession and to the law school. Sutherland and Grant first visited Lewis & Clark in 1983, while on their honeymoon. They returned to teach and research the following year and periodically thereafter. Since 1999, they have spent six months each year teaching at Lewis & Clark, living in their native Scotland during the remaining months.

Sutherland began her career in academia at the University of Edinburgh in 1980, moving to the University of Glasgow 10 years later. In 2006, she joined the University of Stirling Law School as professor of child and family law, and is still teaching there. She is consulted regularly by government agencies, nongovernmental organizations, and the media in Scotland.

In addition to presenting papers at national and international conferences, Sutherland is the author of over 100 articles and book chapters, as well as 10 books. In 2012, she founded the United Nations Convention on the Rights of the Child Implementing Project (CRC-IP) to explore implementation of the UNCRC in the international and comparative contexts. To date, the CRC-IP has organized four international colloquia.

Her comparative and international interests are reflected in two of her books, both published by Cambridge University Press: The Future of Child and Family Law: International Predictions (2012) and Implementing Article 3 of the United Nations Convention on the Rights of the Child: Best Interests, Welfare, and Well-being (2016).

What was one of your most memorable moments at the law school?

“One of my students gave birth early in the semester and, anxious to resume her studies as quickly as possible, asked if she could bring the baby with her. Of course, I agreed—what could be more appropriate in a family law class?”

“I will continue to teach law in Scotland for six months each year. But, since I am on sabbatical leave for the spring semester of 2019, I am looking forward to 18 glorious months of travel; research; travel; writing the third edition of my treatise, Child and Family Law; and travel.”

What was one of your most memorable moments at the law school?

“Returning to my office from class one evening in 2014 with a student, I became so animated by our discussion that I missed a step and broke the fifth metatarsal on my right foot—end of discussion, immediate visit to ER, and the rest of the semester mobile only with a knee scooter.”

“After 50 years teaching law, I am taking some time to smell the roses. I will continue with my consulting and some writing—but will only do what I absolutely want to do.”