NEDC and the Beginnings of Environmental Law at Lewis &  Clark 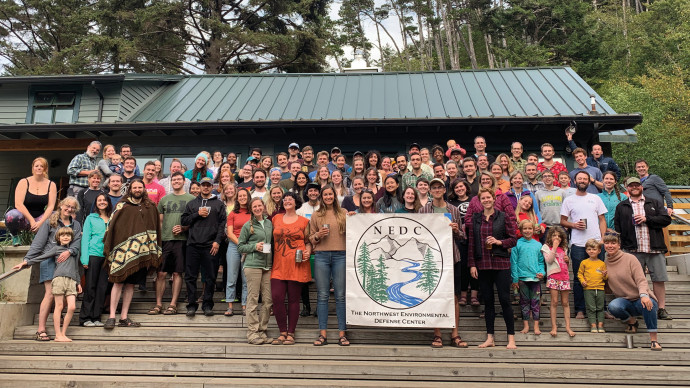 Fifty years ago, a Lewis &  Clark law professor and a Portland attorney met at a local cafe, looked out at a blanket of smog sullying their view of Mount Hood, and decided they’d had enough.

It was 1969. Environmental law was a budding field. The Environmental Protection Agency didn’t yet exist. But Professor Bill Williamson and attorney Charles Merten resolved to help usher in a new era of environmental protection. The pair rallied a group of Lewis &  Clark Law School students and alumni to establish the Northwest Environmental Defense Center (NEDC), a nonprofit legal advocacy organization that would help shape Oregon’s modern environmental landscape and spark Lewis & Clark’s emergence as the nation’s leading environmental law school.

This year, NEDC celebrates a half-century of working to preserve, protect, and improve the environmental quality of the Pacific Northwest.

“NEDC really started the environmental law legacy here,” noted Janice Weis, associate dean and director of the Environmental, Natural Resources, and Energy Law Program. “It was founded, and then it was sort of off to the races.” NEDC’s early work included opposing logging in the watershed that supplies Portland’s drinking water, challenging development, and lobbying the Oregon Legislature for stronger environmental laws. NEDC quickly attracted a coalition of scientists, communicators, teachers, and activists who worked together to influence Oregon’s environmental law and policy.

“There was this constellation of energy that had developed during the ’60s,” said John Platt ’73, who was NEDC’s director in the mid-1970s. “All it needed was a forum, and NEDC provided that.” NEDC remains proudly independent from the law school while maintaining a symbiotic relationship focused on enriching law students’ education. Student volunteers have always been crucial to NEDC’s legal watchdog work, and the opportunity to join NEDC is an attraction for prospective students.

“It seemed like the most practical way to get involved and immediately start helping out on projects that make an impact,” said Bridgett Buss ’20, who joined NEDC soon after arriving on campus her first year.

Buss is part of a strong legacy of students whose involvement with NEDC made a lasting mark. The organization’s longtime executive director, Mark Riskedahl ’00, is a former student volunteer. So is its staff attorney, Jonah Sandford ’15, and nearly every member of the organization’s board of directors. Most of NEDC’s work today involves battling Oregon polluters whose legal transgressions have been ignored by state agencies: A Portland junkyard leaching automobile chemicals into waterways. A Columbia River Gorge coal plant unlawfully expanding its operation. A tallow-rendering plant near Astoria spewing liquified chicken flesh into the Columbia River.

As a student, Chris Mixson ’06 uncovered crucial evidence in that 2004 chicken case, resulting in a felony criminal conviction. Now an environmental lawyer in Reno, Mixson says the case was a prime example of what NEDC does best: tackle important local issues that may not generate national headlines, but are crucial to protecting Oregon’s environmental quality.