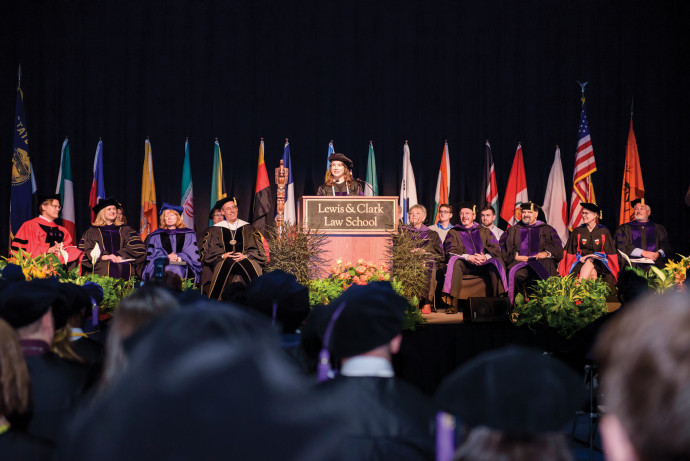 Over 150 graduates received their Juris Doctor degrees surrounded by loved ones, peers, faculty, and staff this spring. The Honorable Michael McShane ’88, federal judge of the U.S. District Court for the District of Oregon, delivered the commencement speech. 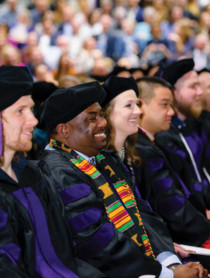 McShane inspired the graduates by sharing how he became “the accidental jurist.” Growing up, he had no interest in law—he admitted that he did not read the constitution until he went to law school.

“I did not have a career plan. I did not have much interest in any particular legal field. I had a paralyzing fear of public speaking,” McShane said.

He reminisced about how he “found his voice” while serving as a public defender. “You, too, will find your voice. And it is a voice that needs to be heard,” McShane told graduates. “As you leave this law school it is up to you to be that voice— despite your reservations, your fears, your uncertainty. It does not have to be a big brassy voice or a pandering voice or a maudlin voice.”

Zach Nelson ’19Honorary degrees were conferred on McShane and Paul Casey. Casey was recognized for providing multiple student scholarships that have had a great impact on Lewis & Clark law students and faculty. (See page 21 for Casey Scholarships.)

Zach Nelson ’19 spoke on behalf of the Class of 2019, reminiscing about the arduous journey they shared. “We supported one another and learned that success in law school is not a zero-sum game.” 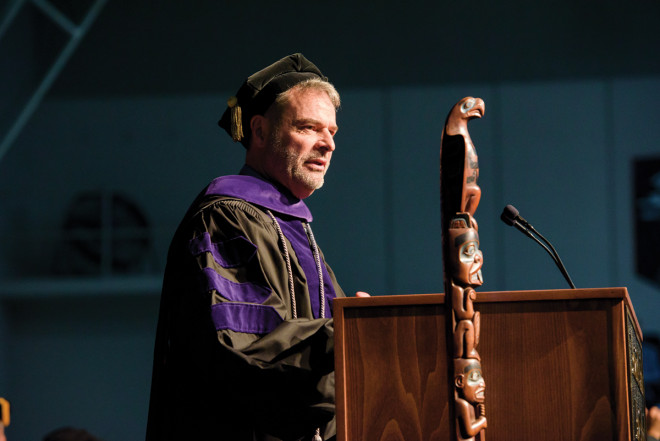 Michael J. McShane ’88 is one of the five Article III judges currently serving on the U.S. District Court of the District of Oregon.

“I know that many are saying that there are too many of you graduating from law school; that a law career these days is not as prestigious as it once was; that there is no money to be had in going into a law career. That if any of you were good at math you would have gone to medical school.

Don’t buy into this pessimism.

Yes, there are problems with the system. But the problem is not too many lawyers.

Justice deserves the largest chorus we can bring together; not a barbershop quartet. Just look around and you know this to be true.

Our environment is being destroyed as we speak. The rule of law is being challenged in the highest levels of our government. Our jails are being filled with the mentally ill. Laws are being passed that would put yet another class of Americans on the back of the bus in the name of religious freedom. Veterans of war are waiting in line for basic medical care. Minorities are being disenfranchised from the ballot box. The homeless are being arrested for camping. We are incarcerating addicts rather than treating them.

Women are still paid and promoted less than their male counterparts. We are traumatizing the children of refugees by separating them from their parents.

I found my voice in a courtroom. I found it by accident, but I found it. You, too, will find your voice. And it is a voice that needs to be heard. As you leave this law school it is up to you to be that voice despite your reservations, your fears, your uncertainty. It does not have to be a big brassy voice or a pandering voice or a maudlin voice. We don’t need loud amens; soft hallelujahs will do just fine.

It simply has to be this:

A voice of dignity for the prostitute who has lost her dignity.

The voice of preservation for an environment that is being destroyed.

A voice of reason for the mentally ill who have lost all reason.

The voice of access for the poor who cannot afford legal services.

The voice of justice for the victim.

The voice of calm for the violent.

The voice of hope for those in fear.

The voice of humanity for those whose humanity is lost.

You can do this. You can do it by being your adorably flawed selves. You can do it and be vulnerable and even afraid. Class of 2019, this is what you are called to do whether you know it yet or not. Thank you in advance for the voices you will bring to our vocation.

From the bottom of my heart, I tell you this: I’ll see you in court.”