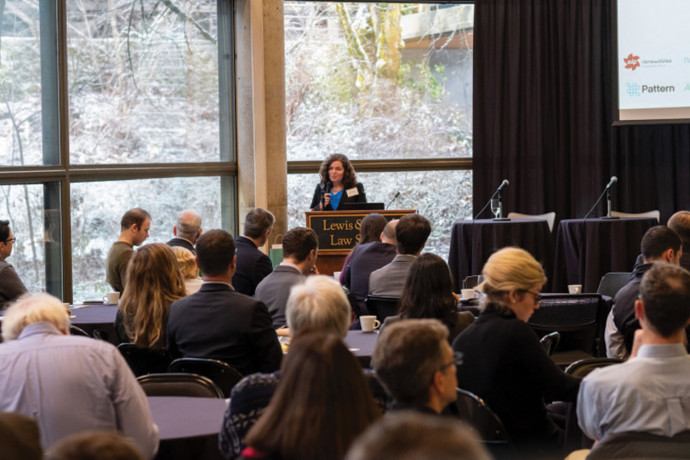 The full-day conference featured elected officials, renewable energy and utility executives, regulators, and advocates who discussed the barriers to ambitious climate-change mitigation and ways to overcome them.

“We have to recognize that the incumbency dynamic associated with our existing resources and economy will require us to be far more strategic, far more generous, far more creative than even the moonshot required,” said Melissa Powers ’01, Jeffrey Bain Faculty Scholar, professor of law, and director of GEI.

The conference featured three panels, which covered topics including federal versus state roles in the Western clean energy transition, state energy policy innovation and collaboration among the Pacific states, the role of the Federal Energy Regulatory Commission (FERC) in grid regionalization, and the rapid influx of new technologies into the Western energy market. Although panelists debated nuances and voiced differing opinions about the way forward, they shared a sense of urgency and a desire to cooperate in order to reach clean energy goals.

U.S. Representative Earl Blumenauer BA ’70, JD ’76 (D-OR) underscored the scope of the crisis. “We are in trouble, and it isn’t just climate. What we need now is something that is aspirational, that captures the spirit of urgency.”

The panelists concurred that collective action by Washington, Oregon, and California will be the key to achieving swift decarbonization.

“We know that by working together we can more efficiently and effectively meet our climate and energy goals,” said Janine Benner, director of the Oregon Department of Energy. “Being able to show what’s possible on the West Coast can help set the stage for future action [at the federal level].”