The Lewis & Clark Board of Trustees has named Dr. Barry Glassner, a noted cultural commentator and the executive vice provost at the University of Southern California, as its 24th president. Chosen by a unanimous vote of the trustees, Glassner will begin his duties in late October.

Glassner has built a successful career as a professor and administrator at several institutions of higher education. A keen observer of American culture, Glassner is the author or coauthor of nine books, including The Culture of Fear: Why Americans Are Afraid of the Wrong Things (1999), a national bestseller that was named a “Best Book of the Year” by the Los Angeles Times. An updated edition was released in 2010.

Prior to becoming USC’s executive vice provost, Glassner served as director of the USC Casden Institute for the Study of the Jewish Role in American Life, and previous to that he chaired the Department of Sociology. Earlier in his career, Glassner led academic departments at Syracuse University and the University of Connecticut. He received a BA from Northwestern University and an M.A. and PhD from Washington University in St. Louis.

Ron Ragen, chair of the Lewis & Clark Board of Trustees, said Glassner embodies the traits and values of the liberal arts—engagement with the social issues and challenges of our time, critical thinking, and academic rigor. Ragen hailed Glassner’s unique blend of effective executive leadership, demonstrated ability to expand an academic institution’s resources, and skill as a community- and consensus-builder.

“Barry built a reputation as a persuasive ambassador for higher education during his time in the Los Angeles community,” Ragen said. “We are eager to see him make his mark in Portland, while he extends Lewis & Clark’s national and global reach.”

“I’m enormously excited and honored to have this opportunity,” Glassner said. “Lewis & Clark has a configuration that is unique in higher education: a law school with programs that are top ranked nationally; a graduate school that produces many of the region’s top education leaders; and an undergraduate college with amazing students—seven Fulbright Scholars this year alone—and an unparalleled level of international engagement.

“Add to that an accomplished faculty that has a reputation for being uncommonly engaged with their students, and a devoted board and 36,000 proud alumni—not to mention the most beautiful campus I’ve ever seen—and it is an awfully exciting place.”

Glassner is married to Betsy Amster, a literary agent and president of Betsy Amster Literary Enterprises (pictured together below). 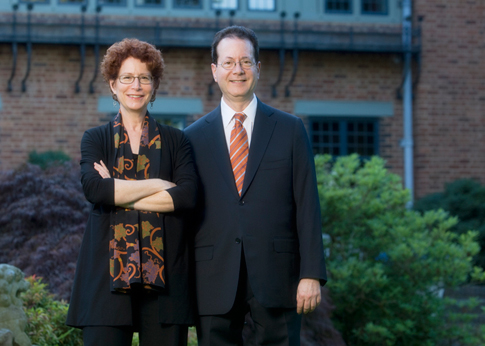 Glassner was recommended unanimously to the Board of Trustees by the Presidential Search Committee, comprising trustees and faculty, staff, and student representatives. Search Committee Chair and Trustee Jay Waldron said the committee was impressed by Glassner’s ability to build relationships with a broad range of stakeholders working toward a common vision.

“In our conversations, Barry articulated a vision that builds on the strengths of the Lewis & Clark community and its rich and diverse set of academic offerings,” Waldron said. “His experience overseeing 18 different schools at USC as executive vice provost uniquely prepares him to lead the three schools of Lewis & Clark.”

Jennifer Johnson, Jeffrey Bain Faculty Scholar and professor of law, was equally impressed by Glassner. As the law school faculty representative on the search committee, Johnson said one of her priorities was to find a president who appreciated the value a high-caliber faculty brings to an institution and understood the demands of balancing teaching, research, mentoring students, and administrative responsibilities.

“Barry is a nationally known scholar in his own right and has excelled professionally as an administrator and fundraiser,” Johnson said.  “He has vast knowledge of the arts and sciences as well as valuable experience with professional and graduate schools. The faculty representatives to the search committee strongly believe that Barry will be an effective advocate for the academic missions of all three schools, and we enthusiastically welcome him to Lewis & Clark.”

A scholar and a leader

Among other honors, Glassner received the University of Southern California’s highest research award—the Associates Award for Creativity in Research—as well as a Phi Kappa Phi Faculty Recognition Award. He has served as the elected chair of one of the largest sections of the American Sociological Association and as a fellow of the Los Angeles Institute for the Humanities.

Glassner, who will join the Lewis & Clark undergraduate faculty as a tenured professor of sociology, has had his work featured in a wide range of mainstream media outlets and scholarly journals. His articles and commentaries have appeared in newspapers including the New York Times, Wall Street Journal, Los Angeles Times, and Chronicle of Higher Education, and his scholarly research has been published in the American Sociological Review, the American Journal of Psychiatry, and other leading journals in the social sciences.

Glassner is credited with playing a prominent role in USC’s development into one of the top private universities in the country. “Our committee was impressed by the work he did to unite the university’s disparate departments and build a singular strategic vision for its future,” Search Committee Chair Waldron said.

His reputation as an effective leader is well known in the academic arena. The president of Northwestern University, Morton Schapiro, said he believed Glassner will be a tremendous asset to Lewis & Clark.

“Barry is a perfect fit for such a fine institution,” said Schapiro, who previously served as president of Williams College. “He is a fabulous administrator, superb scholar, and excellent teacher. Equally important is the fact that he is a wonderful person. The students, faculty, alumni, and staff at Lewis & Clark are in for a real treat.”

Lewis & Clark began its search for a new president in August 2009 when then-President Thomas Hochstettler took a position with the American University of Sharjah in the United Arab Emirates. Provost Jane Atkinson has served as interim president since then. Ragen said the board and the entire Lewis & Clark community are deeply indebted to Atkinson for her dedication to the college.

“Jane has served at the college for more than 30 years, and I don’t believe there is anyone who knows this place as well as she does,” Ragen said. “She has done an amazing job as interim president, and we are fortunate to retain her expertise and leadership. She will be a valuable asset to Barry as we move through this leadership transition.”

The firm of Isaacson, Miller provided assistance to the search committee.