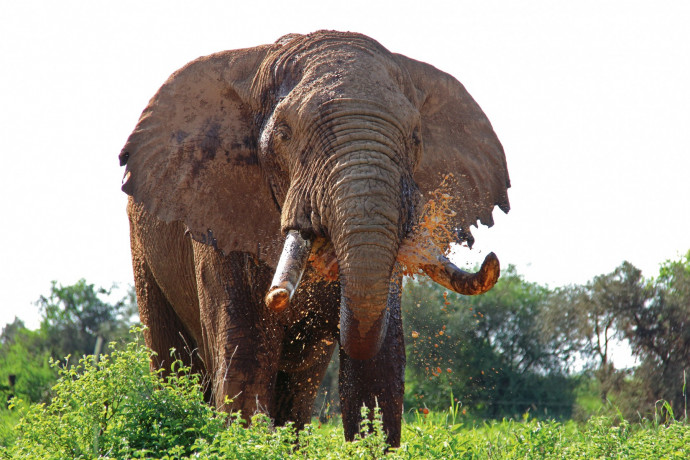 A lone bull elephant traveling outside Amboseli National Park, feet away from the tented camp where Dolezal stayed while attending the National Judicial Dialogue on Environmental and Wildlife Crimes in December 2013.

As the global leader in animal law education, the Center for Animal Law Studies (CALS) recognizes the need for educational opportunities that teach collaboration across international boundaries and cultures.

The Kenya Legal Project—launched this year by Assistant Dean of the Animal Law Program and Executive Director of CALS Pamela Frasch, Clinical Professor of Law and Animal Law Clinic Director Kathy Hessler, and Director of the Animal Law LL.M. Degree Program Natasha Dolezal ’06—is designed to provide such opportunities. The project’s goals are to use the law to support Kenya’s efforts to address the immediate crisis facing Africa’s elephants and to help establish animal legal education as a foundation for the protection of the interests of animals into the future. 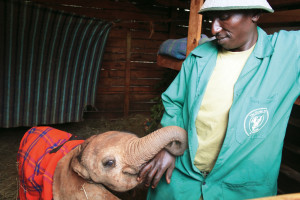 An orphaned baby elephant and the keeper who hand raises her at the David Sheldrick Wildlife Trust with the goal of reintegrating her back into the Kenyan wildlife.Following Kenya’s adoption of a new constitution in 2010, the country stepped up efforts to protect its animals from wildlife trafficking and poaching. Debra Durham, a primatologist and ethologist working with Africa Network for Animal Welfare (ANAW), and Lewis & Clark’s Hessler began discussing how the Animal Law Clinic might assist ANAW’s efforts in Kenya. Soon, the conversation grew to include Dolezal. (You can learn more about her story here.) To explore the possibilities, Hessler, Durham, and Dolezal secured travel grants and visited the country in the summer of 2013.

In September of that same year, the first international Pan African Animal Welfare Alliance conference took place. One of the speakers at the event—which included lawyers, conservation officers, veterinarians, and others from across Africa and beyond addressing animal welfare against the background of the continent’s development—was Frasch. (Mindful of environmental and economic costs, she participated virtually, via a pretaped presentation.)

In December, Dolezal returned to participate in the country’s first National Judicial Dialogue on Environmental and Wildlife Crimes, which brought together members of the judiciary, Kenya Wildlife Service, prosecutors, police, and conservation organizations. Over the course of the dialogue, she met the two magistrate judges presiding over courts located in poaching hot spots. The judges were particularly interested in her account of how U.S. animal law advocates work with networks of specially trained prosecutors and utilize forensics experts. 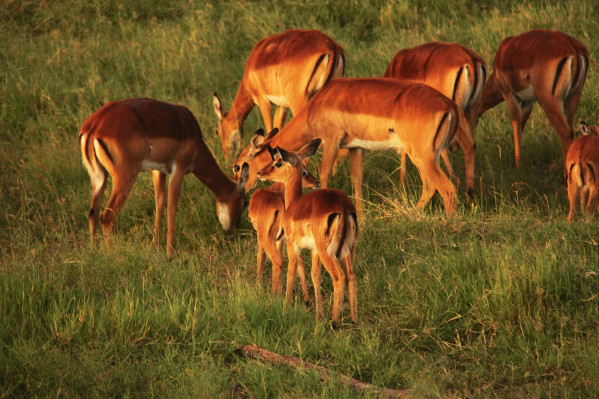 A herd of impala at Ol Pejeta Conservancy, a 90,000-acre nonprofit wildlife conservancy in the Laikipia district of central Kenya, on the equator between the foothills of the Aberdares and Mount Kenya. 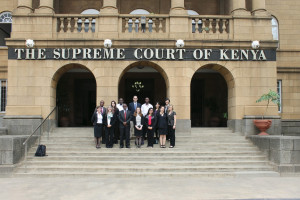 Standing outside the Supreme Court of Kenya, located in Nairobi.Kenya completely revised its Wildlife Management and Conservation Act early in 2014. Now, the judiciary would start playing a key role in the country’s fight against poaching. The time was right for CALS to develop a more structured collaboration with Kenya’s animal law advocates.

The Kenya Law Project currently consists of three parts: an international professional exchange program intended to introduce Kenyan judges and lawyers to the field of animal law as it exists in the United States, research opportunities at the Animal Law Clinic, and the first animal law course ever taught on the African continent.

“In the United States, we have a very strong system of protecting endangered species and their habitats,” said Hessler. But, she added, “We can share information about what hasn’t worked well here so they can avoid our mistakes.”

The two magistrates who demonstrated such interest in the workings of U.S. animal law were selected to take part in the project’s international professionals program. For three weeks, they were hosted at Lewis & Clark and participated in two animal law summer courses, Crimes Against Animals and Comparative International Animal Law, taught by adjunct professors Dana Campbell ’88 and Gieri Bolliger LL.M. ’14. The Animal Legal Defense Fund also provided the magistrates with visits to a forensics lab and animal sanctuary, as well as conversations with humane investigators, animal cruelty prosecutors, and forensics experts. 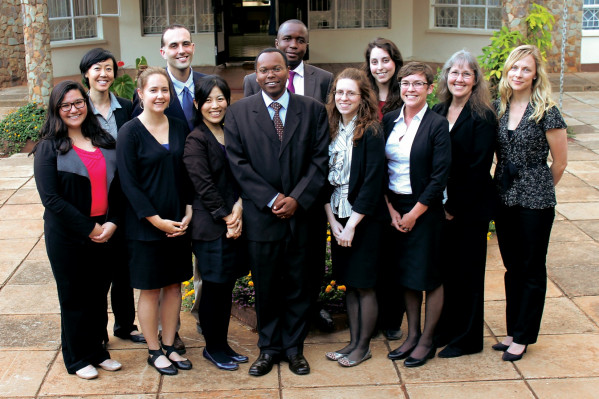 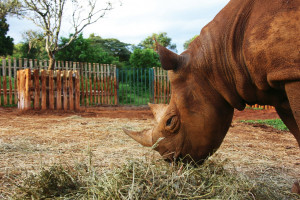 The first animal law course in Kenya was planned for May. In preparation, students in the Animal Law Clinic worked on a number of projects specific to Kenya, researching and summarizing information about Kenya’s legal system, constitution, recently amended Wildlife Conservation and Management Act, and anticruelty act (CAP 360). They also compared the U.S. approach to environmental, wildlife, and animal cruelty laws with that of Kenya, as well as researching U.S. Agency for International Development and U.S. Fish and Wildlife Service involvement in and funding of projects in that country. They also compiled information about poaching in Kenya and throughout Africa. This work would be shared with the students participating in the Kenya course, to help familiarize them with the legal structure and laws relating to wildlife and animal cruelty.

Finally, eight students—JD and LL.M. candidates and one practicing attorney—were selected from a field of highly qualified applicants to take part in a three-week course that included two weeks in Kenya. (Donors helped cover the travel costs.) Participants attended meetings with various stakeholders to ask questions and gain deeper insights to inform further work in the Animal Law Clinic. The students studied firsthand the implications of wildlife and cruelty laws by speaking with Kenyan prosecutors, judges, veterinarians, and wildlife conservation professionals about their struggles to implement and enforce laws protecting animals. From visiting a local court located in a poaching hot spot, to trekking through the bush looking for illegal snares, participants were exposed to the complexity of dealing with wildlife and animal cruelty legal issues when constrained primarily by infrastructure limitations and sociocultural factors. 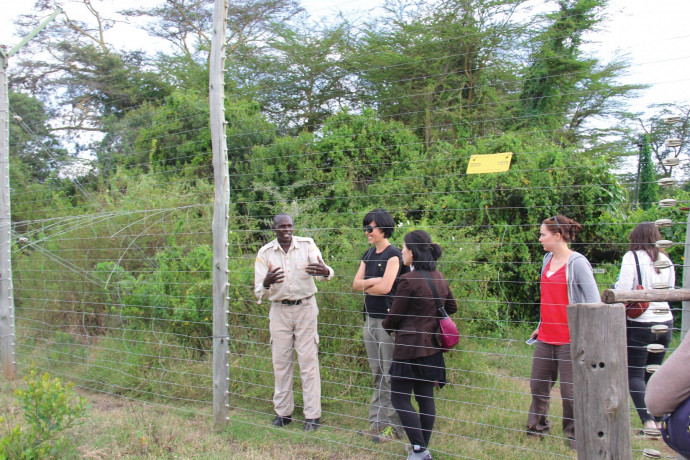 Students listen to a keeper at Sweetwaters Chimpanzee Sanctuary. The sanctuary began in 1993 to provide a permanent home to abused and orphaned chimpanzees from West and Central Africa.

Of the world’s many urgent animal issues, perhaps none is as pressing as the plight of Africa’s elephants. At the current rate of poaching, Africa’s wild elephants will be gone in 10 years. Course participants were able to see these animals in their natural habitat and hear directly from those prosecutors, biologists, conservationists, and judges trying to use the law to protect them. After each of these meetings, a student was assigned to reflect on and share his or her experience by contributing to the Kenya Legal Project’s blog.

At the conclusion of the course, participants collaborated to synthesize the information they had gleaned and to highlight remaining questions. The resulting report was shared with Kenyan colleagues from ANAW.

“I think the field of animal law lends itself to international collaboration,” said Christina Kraemer LL.M. ’14. “A win for animals in Africa is a win for animals everywhere.”

The Animal Law Clinic has also been retained to work for WildlifeDirect, another Kenyan NGO focused on wildlife protection. Clinic students will survey U.S. wildlife crime prosecutions that involve African animals, with the goal of completing an analysis of enforcement modalities and sentences/penalties in the two countries. In turn, this analysis will be used as a reference tool during the development of further reforms to Kenya’s wildlife act. This new work satisfies another goal of the Kenya Legal Project—to determine what legal or social changes could be advocated for in the United States as a means to support animal protection and conservation efforts in Kenya and throughout Africa. 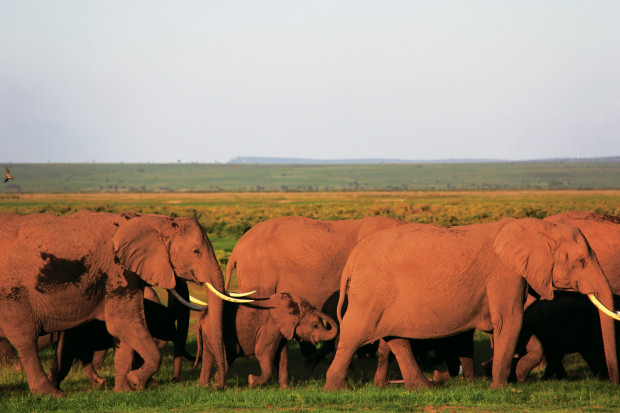 A herd of elephants in Amboseli National Park in December 2013. Since 1972, the elephants of Amboseli have been the subjects of the longest study of elephant behavior. 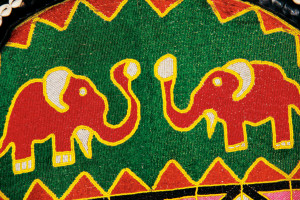 As David Rosengard ’15 told The Oregonian, “Combating the militarized poachers who are doing this hunting not only saves those animals from death, but undermines the organized crime and terror networks that fund themselves off of poaching proceeds and in turn spread corruption, violence, and misery. In this way, advancing the interests of animals also advances our societal interests.”

CALS plans to further develop the Kenya course, the legal work in the Animal Law Clinic, and the international professional exchange with Kenya’s judiciary in the coming year. Building on the project’s successes, CALS looks forward to extending its working relationships with advocates who are creating and utilizing legal protection for animals, and to welcoming a new group of students to engage in this transformative work.