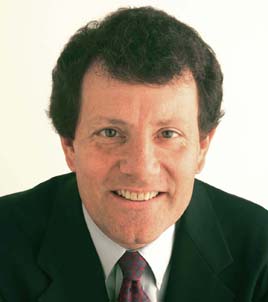 Nicholas D. Kristof graduated from Harvard College, Phi Beta Kappa, and then won a Rhodes Scholarship to Oxford, where he studied law and graduated with first class honors. He later studied Arabic in Cairo and Chinese in Taipei. After working in France, he caught the travel bug and began backpacking around Africa and Asia, writing articles to cover his expenses. Kristof has lived on four continents, reported on six, and traveled to 140 countries, plus all 50 states, every Chinese province and every main Japanese island.

After joining The New York Times in 1984, initially covering economics, he served as a correspondent in Los Angeles and as bureau chief in Hong Kong, Beijing, and Tokyo. In 2000, he covered the presidential campaign and in particular Governor Bush, and he is the author of the chapter on Bush in the reference book The Presidents.

In 1990 Kristof and his wife, Sheryl WuDunn, then also a Times journalist, won a Pulitzer Prize for their coverage of China’s Tiananmen Square democracy movement. They were the first married couple to win a Pulitzer for journalism.

Haunted by what he has seen in Darfur, Kristof has traveled to the region four times to provide coverage of the genocide that is unfolding there. In 2006, he won his second Pulitzer Prize for Commentary “for his graphic, deeply reported columns that, at personal risk, focused attention on genocide in Darfur and that gave voice to the voiceless in other parts of the world.”

Kristof has also won other prizes including the George Polk Award, the Overseas Press Club award, the Michael Kelly award, the Online News Association award, and the American Society of Newspaper Editors award. Kristof and WuDunn are authors of China Wakes: The Struggle for the Soul of a Rising Power and Thunder from the East: Portrait of a Rising Asia.

Kristof, a columnist for The New York Times since November 2001, writes op-ed columns that appear twice a week. Kristof is originally from Oregon and grew up on a sheep and cherry farm near Yamhill.  His columns have discussed this experience, as well as important animal protection issues.

Kristof’s latest book co-written with wife Sheryl WuDunn, Half the Sky: From Oppression to Opportunity to Women Worldwide*, was released in September and continues to receive praise.  The book comprises a series of essay and anecdotes about women and oppression and calls for a world-wide revolution for change.

* Half the Sky is available for purchase during the Conference in the Merchandise and Literature Room as well as at the Saturday evening Book Signing with Mr. Kristof.  Please be sure to come meet Mr. Kristof and have your copy signed by him.

Jonathan Lovvorn is Vice President & Chief Counsel for Animal Protection Litigation & Research at the Humane Society of the United States. An expert in the fields of environmental and animal law, Mr. Lovvorn manages the nation’s largest and most effective animal protection litigation program, with a team of 15 in-house lawyers, a network of over 1,000 pro bono attorneys, and a docket of more than 40 active cases. In the last two years, HSUS’s legal team has filed dozens of new cases and won over 30 courtroom victories to protect animals from cruelty and abuse.

In addition to his duties with HSUS, Mr. Lovvorn also serves as an adjunct professor of Animal Law at Georgetown University Law Center, has authored several articles concerning animal law and wildlife policy, and regularly lectures on animal law at Harvard University, Columbia University, New York University, and many other major law schools.

Mr. Lovvorn’s legal work on behalf of animals has been featured in The Wall Street Journal, The New York Times, The National Law Journal, American Lawyer, The Washington Post, The Los Angeles Times, CNN, NPR, and local television and radio outlets around the country.