Almost 1 million barrels of crude oil ship per day in Canada and the United States.

300 million barrels of crude oil shipped in 2013 in the United States.

Exports swapped for imports in the crusade to market liquefied natural gas (LNG).

Large-scale extraction of coal, oil and gas in the center of North America has made Washington and Oregon ports particularly attractive destinations for proposals to facilitate movement of these dirty energy sources to markets across the globe.  The scale and frenetic pace of these proposals has us, along with citizens across the region, concerned. Is the green image of the Pacific Northwest in the midst of a major transformation? 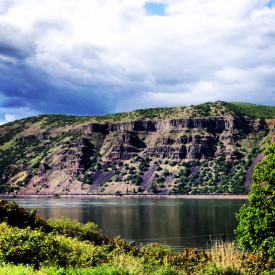 Three coal export terminals and eleven crude oil projects (refinery expansions or proposed transloading facilities) have been proposed or are already underway across Washington and Oregon. The low price of transporting coal by rail helps make electric generation from coal comparatively cheap. In the face of limited pipeline capacity and effective opposition to pipeline expansion, crude oil companies have also turned to rail. The number of rail carloads of crude oil transported in the United States increased by more than 450% between 2008 and 2013. That number is expected to increase yet again in 2014.

Transporting crude oil and coal by rail and marine vessels threatens the water and air quality of the Pacific Northwest. Unit trains consist of 50 to 120 or more cars containing a single commodity and present distinct dangers due to the sheer volume being transported with each haul. A single spill from a unit train moving volatile organic liquids through the Columbia Gorge would be catastrophic to water quality and aquatic life, as well as the economies that depend on these resources. News sources in Washington and Oregon have documented the lack of preparedness for these spills by local emergency response agencies. Once commodities are transloaded off the rails, emissions from the facilities and the marine vessels that would carry the crude oil or coal along the coast to refineries or coal power plants place local air quality at risk.

Using rail to transport volatile organic liquids such as crude oil also endangers public safety. The tragedy at Lac-Mégantic, Quebec, and close to 100 subsequent accidents in the United States involving the transport of crude oil since that time (including derailments in Alabama; Casselton, North Dakota; and Lynchburg, Virginia; and a marine vessel spill on the Mississippi River in Louisiana), highlight the public safety concerns of moving volatile materials through the region. Additional concerns include the resulting traffic congestion and ability of emergency responders to access communities that are divided by rail lines.

Natural gas burns cleaner than coal and carries less perceived risk of catastrophic accident than nuclear power; yet natural gas projects will still result in increased greenhouse gas emissions and may supplant renewable energy projects. Plus, exporting LNG is likely to come with its own costs. Leaks from natural gas production and pipelines, additional energy needed for the liquefaction process, and carbon emissions from the liquefaction process are just some of the concerns.