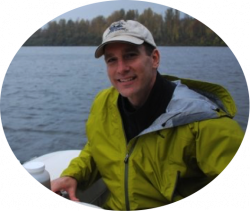 Mark Riskedahl, Executive Director
Mark grew up in a little house on the prairie in rural North Dakota. He received a BA from the University of Minnesota and his JD from Lewis & Clark Law School.  Before attending law school, Mark worked in the social services, primarily with people dealing with autism.  During law school, Mark worked as the NEDC Law Clerk, a Project Coordinator, and Student Director.  Following graduation, Mark helped institutionalize NEDC’s capacity to protect the environment and natural resources of the Pacific Northwest by becoming the organization’s first full-time Executive Director.

Jonah grew up in Missoula, Montana, and moved to Portland in 2003 after graduating from the University of Montana. As a law student at Lewis & Clark, Jonah worked with NEDC as a Student Director and Project Coordinator, and clerked for Earthjustice, the Center for Biological Diversity, and WaterWatch of Oregon. Prior to joining NEDC as Staff Attorney, Jonah served as Executive Director of the Deschutes River Alliance. In his free time, Jonah enjoys canoeing, hiking, and goofing off with his son Jasper.