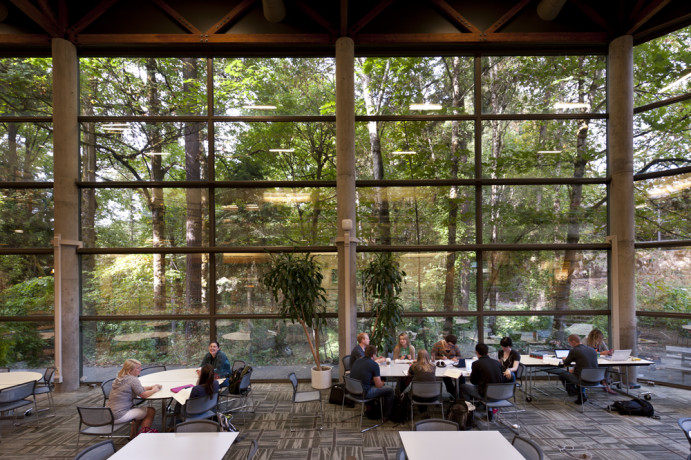 Named for a prominent local attorney and patron of the law school, Lewis & Clark’s law library is the largest in Oregon and the second largest in the Northwest. The 48,000 square-foot structure, which holds the library stacks as well as study spaces, has a uniquely designed roof supported with 10 hyperbolic parabolas that form the ceiling of the building. Large floor to ceiling windows look out onto the campus and the forest of Tryon Creek State Park. The library houses the equivalent of over 500,000 volumes and holds reference materials and periodicals standard to all law libraries.

Named for Dean Calvin U. Gantenbein’s son, who maintained the family tradition of generous support for the school, this building was originally constructed as a lounge for students. With a fireplace and comfortable couches, the common space remains a popular gathering place. The building presently houses Admissions and the Career Service Center, as well as lockers, and showers.

Named in honor of industrialist and Lewis & Clark trustee William Swindells, this 40,000 square-foot building is an administrative hub of the law campus and is built with floor to ceiling windows looking out onto the beautiful forest of Tryon Creek State Park.  It contains the Office of the Registrar, faculty and administrative offices, the development and alumni office, seminar rooms, the student lounge, the law bookstore, and a café.