NCVLI’s Victims’ Rights Partnership Award recognizes the collaborative efforts of individuals and/or organizations who have devoted their time to advancing crime victims’ rights. 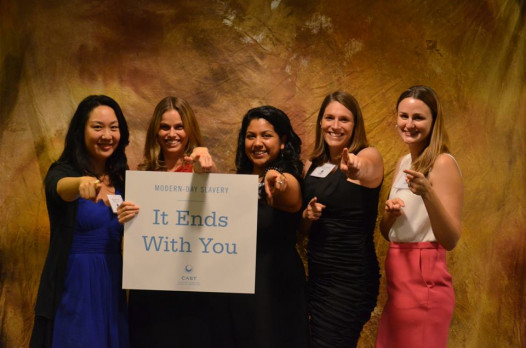 The Coalition to Abolish Slavery and Trafficking (CAST) is a multi-ethnic, multi-lingual human rights organization that has been nationally and internationally recognized for its dedication to the identification of victims, mobilization of all sectors of the community to identify and advocate against trafficking, and provision of direct services for victims.  CAST was established in 1998 in the wake of the El Monte sweatshop case where 72 Thai garment workers were kept for eight years in slavery and debt bondage. Following the leadership of Dr. Kathryn McMahon, relationships were formed between government agencies and community organizations, and CAST was created to respond to surfacing trafficking cases in Los Angeles through the provision of intensive case management, comprehensive services, and advocacy for survivors who are healing from unspeakable trauma.

CAST provides comprehensive long-term services through a three-pronged empowerment approach which includes Comprehensive Client Services (social and legal), Outreach and Training, and Survivor-led advocacy. The organization also operates the first shelter in the nation dedicated to serving victims of trafficking. CAST’s mission is to assist persons trafficked for the purpose of forced labor and slavery-like practices and to work toward ending all instances of such human rights violations.

In 2003, CAST established the Survivor Advisory Caucus, a one of a kind leadership development program for survivors of human trafficking. The purpose of this program is to provide survivors interested in developing their leadership skills with opportunities for training, organizing and survivor-to-survivor mentorship. In 2011, the Survivor Advisory Caucus led the first effort in the country to unite survivors across the United States to create a National Survivor Network.

CAST is a founding member of both the Freedom Network and the Alliance to End Slavery and Trafficking (ATEST), and is at the forefront of advocacy efforts to improve access to services and protections for trafficked persons, to increase accountability in global supply chains, and to ensure adequate and appropriate prevention measures.

Stephanie Richard
Stephanie Kay Richard, Esq., is the Policy & Legal Services Director at CAST where she provides direct legal services to survivors of human trafficking and technical consultation on human trafficking cases nationwide.  She has also served as the domestic lead for the Alliance to End Slavery & Trafficking (ATEST) and the policy Co-Chair of the Freedom Network, USA, two national US based coalitions working to improve federal and state laws and the implementation of these laws to better serve trafficking survivors in the United States.  She graduated summa cum laude from American University, Washington College of Law, where she was the recipient of a public interest/public service scholarship.  She is licensed to practice law in California, Maryland, Minnesota, and Washington, DC.

Sara Van Hofwegen
Sara Van Hofwegen, Esq., joined CAST in June 2012. As a staff attorney, Ms. Van Hofwegen provides direct legal services to survivors of human trafficking, including immigration assistance and victim advocacy in the state and federal criminal court systems.  She also provides technical assistance on human trafficking cases throughout the United States.Ms. Van Hofwegen received her Juris Doctorate from the University Of Southern California Gould School Of Law where she was inducted into the Order of the Coif and received the 2009 Equal Justice Award.  Prior to joining CAST, Sara represented immigrant women detained by the Department of Homeland Security as a staff attorney at Americans for Immigrant Justice and sought immigration relief on behalf of survivors of human trafficking, domestic violence, sexual assault, and other violence.  Ms. Van Hofwegen is fluent in Spanish and licensed to practice law in California.