﻿On May 29th, Federal District Court Magistrate Judge Clarke issued an opinion, finding that, as a matter of law, a Jackson County Ordinance that prohibits the growing of genetically modified (“GE”) crops in that County was legal under Oregon law. Earthrise attorneys Tom Buchele and Lia Comerford, along with their co-counsel George Kimbrell (Lewis & Clark alum) and Amy Van Saun (Lewis & Clark and Earthrise alum) with the Center For Food Safety and local attorney Bernard Moore (Lewis & Clark alum), represented four defendant-intervenors in the case and had urged the Court to uphold the Ordinance.

Jackson County, Oregon, is a unique, geographically isolated farming area that has a great climate for growing vegetables and vegetable seeds. However those favorable growing conditions have attracted multi-billion dollar corporations that have been developing GE crops. In 2012, international conglomerate Syngenta began growing test plots for its GE sugar beets in Jackson County. Local traditional farmers were alarmed by this development and soon learned that there might also be GE alfalfa and GE corn growing in the county. Those traditional farmers were growing crops, including seed crops, for customers who had no tolerance for transgenic contamination.

In order to protect their crops from the commercial damage they would suffer when transgenic contamination from the GE crops growing in the County inevitably occurred, many of Jackson’s County’s traditional farmers came together and sponsored a ballot initiative that would ban the growing of GE crops in Jackson County. In May of 2014, Jackson County’s voters overwhelmingly approved that initiative, and the resulting Jackson County Ordinance is scheduled to take effect on June 5, 2015.

However, last November two Jackson County farmers who grow GE alfalfa sued Jackson County claiming that the Ordinance violated Oregon’s Right to Farm Act and, in the alternative, was an unconstitutional taking. Those farmers were represented by a very high-priced Portland firm, and received assistance from biotech organizations that develop and market GE crops. The local farmers who had sponsored the Ordinance were concerned that the County would not have the resources to defend the Ordinance, and they sought help from Earthrise and the Center for Food Safety.

In December 2014, Earthrise and CFS attorneys filed a motion to intervene in the legal challenge to the Ordinance as defendants on behalf of a local Jackson County farmer (Chris Hardy), a local farm (Oshala Farm), the Our Family Farms Coalition (which had successfully campaigned for the Ordinance) and CFS. After that motion was granted in February, the parties engaged in expedited discovery and briefed summary judgment on the legal issue of whether the Ordinance violated Oregon’s Right to Farm Act. On May 20th in Medford, Oregon, Earthrise Managing Attorney Tom Buchele argued in favor of the defendant-intervenors’ motion for summary judgment.

Judge Clarke granted that motion for summary judgment, and that of defendant Jackson County, on May 29th, finding that the Ordinance was indeed legal under Oregon law on two separate legal grounds. First the Judge found that under Oregon’s Right to Farm Act, the County could ban GE crops in order to prevent the County’s traditional farmers from suffering commercial damage to their traditional crops. Second, the Judge held that the Ordinance was specifically authorized by the Oregon Legislature in 2013 when it passed a bill that banned local regulation of GE crops but that also specifically exempted Jackson County from that ban. Both these legal issues were matters of first impression. This was the first time that a court has ruled on these issues and on both of them, the Court clearly sided with the arguments put forth by Earthrise in its legal memoranda. 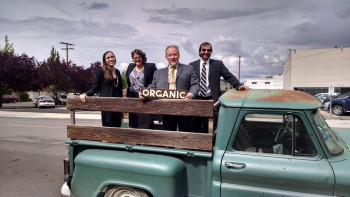 This has been an unusual case for Earthrise in many respects. It required us to engage in very expedited discovery in an unfamiliar area of the law. We also found ourselves representing defendants, which we do not do very often. But the case also offered Earthrise the opportunity to help a group of small farmers who were fighting against the rising tide of GE crops and the economic and environmental risks that come along with those GE plants. Moreover, Earthrise students gained significant and important experience helping with the numerous, unusual legal issues presented by the case. Those Earthrise students included Kelsey Herman, Samantha Omana, Erik Hanselman, Doug DeRoy, Andrea Lang, and Kat McIntosh. Their assistance played a significant part in this important Earthrise victory for our clients.