On October 13, 2020, Lewis & Clark’s Environmental, Natural Resources, & Energy Law program welcomed Professor Alexandra B. Klass as the 32nd annual Environmental Law Distinguished Visitor. Her lecture, titled “U.S. Energy Transitions in the Trump Administration: A Law and Policy Perspective”, was delivered (via webinar) to a wide audience of environmental law alums, practitioners, faculty, and students. This event is one of several events the program has hosted throughout 2020 in celebration of its 50th anniversary.

Professor Alexandra B. Klass teaches and writes in the areas of energy law, environmental law, natural resources law, tort law, and property law. Her recent scholarly work, published in many of the nation’s leading law journals, addresses regulatory challenges to integrating more renewable energy into the nation’s electric grid, transportation electrification, oil and gas transportation infrastructure, and the use of eminent domain for electric transmission lines and pipelines. She is a co-author of Energy Law: Concepts and Insights Series (Foundation Press 2017), Energy Law and Policy (West Academic Publishing 2d ed. 2018), Natural Resources Law: A Place-Based Book of Problems and Cases (Wolters Kluwer, 4th ed., 2018), and The Practice and Policy of Environmental Law (Foundation Press, 4th ed. 2017). Professor Klass was named the Stanley V. Kinyon Teacher of the Year for 2009-2010, and she served as Associate Dean for Academic Affairs from 2010-2012. She was a Visiting Professor of Law at Harvard Law School in 2015 and at Uppsala University in Sweden in 2019. She is a Distinguished McKnight University Professor and in prior years was the Julius E. Davis Professor of Law and the Solly Robins Distinguished Research Fellow.

Prior to the start of the lecture on September 13th, the law school honored several alumni as Distinguished Graduates: Brad Grenham ’95, Tanya Sanerib ’02, and Lara Skidmore ’93 in memoriam. The alumni also honored Sangye Ince-Johannsen (’19) and Hannah Clements (’20) as the Williamson Award recipients. 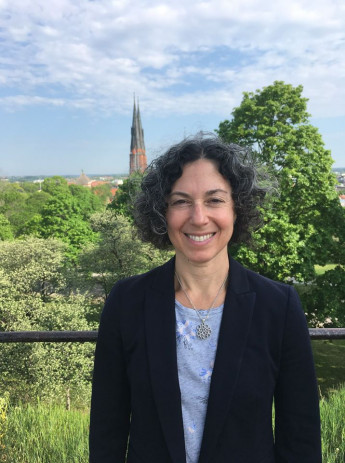 Prior Distinguished Visitors include:

“Western Water Law and the Challenge of Climate Disruption”

“How White Collar Criminal Enforcement Can Save the Environment”

“Turning the World Upside Down: How Frames of Reference Shape Environmental Law”

“Putting a Price on Whales to Save Them”

“The President’s Role in Environmental Law”

“What Climate Change Can Do About Tort Law”

“After Cap-and-Trade: The Climate-Forced Path of Environmental Law”

“Climate Change in the Supreme Court”

University of Illinois School of Law

“Goodbye to the Public/Private Divide”

“Conceiving Laws for the Biosphere”

University of Colorado School of Law

“Water Wrongs: Why Can’t We Do It Right the First Time?”

University of Maryland School of Law

“Law and the Fourth Estate: Endangered Nature, the Press, and the Dicey Game of Democratic Governance”

“The Babbit Legacy at the Department of Interior: A Preliminary View”

“Tragically Difficult: The Problems of Regulating the Commons”

“The New Electric Power Houses in America: Will They Transform Your Life?”

“Are Humans Part of Ecosystems?”

University of California at Davis School of Law

University of Minnesota School of Law

“The Critical Roles of Politics and Economics in Resolving Environmental Issues”

History of NRLI and the Distinguished Visitor’s Lecture

The Natural Resources Law Institute (NRLI) provided a focus for legal scholarship at Lewis & Clark’s law school. The NRLI supported work by an annual research fellow, distinguished faculty visitor, and visiting scholars from around the globe, as well as faculty research. The institute has coordinated more than 20 educational programs dealing with natural resources law, several of which have been conducted nationwide. NRLI also conducts intensive, specialized environmental law trainings for federal judges, government agencies, and judges and lawyers in other countries.

NRLI cosponsored, with various student groups, a series of Environmental Colloquia at the law school, attracting local, regional, and national speakers on a range of topics. These colloquia were free and open to the public.

The Environmental, Natural Resources, and Energy Law program continues to provide these programs and events after the dissolution of NRLI. Our Newsletter provides updates on our program.